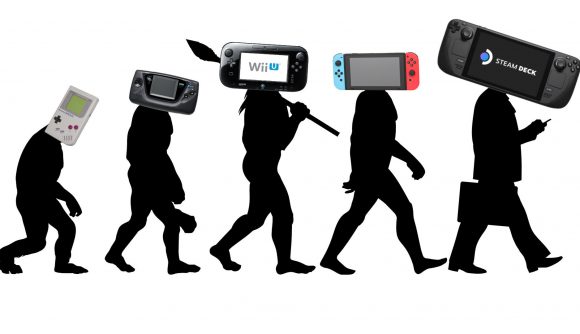 The Steam Deck is set to be a chonky, portable powerhouse, but photos of the device sitting next to a Nintendo Switch really put its size into perspective. Shared by Carygolomb on Twitter, the images make Valve’s handheld look like a goliath compared to the Switch OLED model, and its handles make it substantially thicker too.

Carygolomb’s thread also compares the Steam Deck to some of gaming’s bulkiest gadgets, including the Sega Game Gear, Atari Lynx, NEC TurboExpress, and the iconically large Wii U gamepad. From what we can tell, it looks like Valve could earn itself the title of “biggest handheld ever”, as it’s even larger than the original Game Boy’s retail packaging.

The size of Valve’s Steam Deck shouldn’t come as a surprise, especially since it’s essentially a small, low-spec gaming PC. Yet, placing the device next to various portables hammers home the fact that it’s in a different league. Sure, you could fit the Deck in the pocket of your overalls like a baby kangaroo, but ultimately, the handheld is far too big to be another Game Boy tribute act.

Comparing the Steam Deck to the Nintendo Switch, retro consoles and unconventional controllers is just a bit of silly fun However, its size compared to the Ayaneo Next is worth talking about, as Valve’s competitor seems to have the edge when it comes to form-factor. That said, the Next does come in at $1,265 USD, so perhaps comparing the two is a little unfair.

Here’s the #steamdeck next to the Switch OLED. pic.twitter.com/kbGF9exbe0

Valve’s Steam Deck might be comically large, but thanks to OS-level AMD FSR support, it could be a serious option 1080p PC gaming. While you’ll need to install Windows 11 to use additional storefronts, playing your free Epic Game Store downloads via SteamOS could also be a possibility, thanks to Proton’s unofficial Heroic launcher.