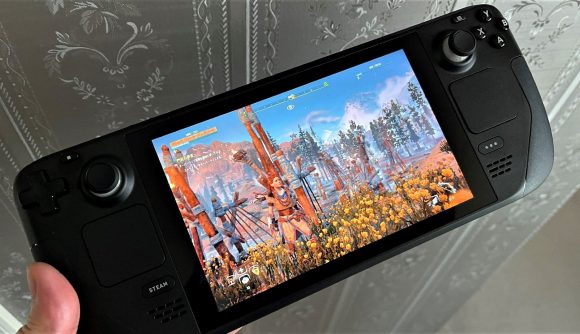 Sony Interactive Entertainment has a lot in the gaming PC pipeline, with PS4 ports of God of War and a shiny new ‘PlayStation PC’ publishing label. Yet, while the company’s multiplatform ambitions cater primarily to high-spec gaming enthusiasts, SIE’s former president, Shuhei Yoshida, seems to be enthusiastic about PlayStation’s presence on Valve’s Steam Deck handheld.

In a recent Twitter post, Yoshida shared a photo of a Steam Deck dev kit running Horizon Zero Dawn and thanked Valve for sending the unit across. Of course, the PlayStation veteran doesn’t specify whether the PC port plays nice with the portable, but its inclusion on Valve’s verified game list seems likely.

Visually speaking, it looks like Horizon Zero Dawn is running with reduced settings on Yoshida’s dev unit, as the game almost looks like it could be a PlayStation Vita title. That said, there’s a chance that it could run with higher options enabled, providing you’re not looking to boost fps to its full potential.

Valve’s micro gaming machine is understandably low-spec, but in comparison to Sony’s previous handheld efforts, it’s a portable powerhouse. Therefore, there’s a chance we could see the Steam Deck become an unofficial PlayStation Vita successor, especially if the company continues to console exclusives on the Steam storefront.

Before you get too excited, it’s worth noting that Yoshida’s enthusiasm for the Steam Deck is far from being an official partnership confirmation. So, it’s probably wise to wait and see what PlayStation has in store for the portable platform.