If you read superhero comics long enough, you’re bound to eventually run across someone who gets it into their head to destroy the entire galaxy for some reason. The next major expansion for the space-faring grand strategy game Stellaris was revealed today: it’s called Nemesis, and it’s going to let you become that guy.

In Nemesis, the endgame is changing, and it’s turning into a desperate race between a Thanos-like character who wants to destroy the galaxy and everything in it, and the people who would prefer that this didn’t happen. You’ll be able to take on this ultimate evil role yourself, devouring the very stars themselves in your quest to generate enough dark matter to power a device called the Aetherophasic Engine.

Paradox has updated its latest Stellaris dev diary to provide some first details about the expansion. In Nemesis, you’ll be able to become the Crisis, and to do that, you’ll first pick that as an ascension perk. Selecting it allows you to progress towards becoming the Crisis itself.

As you might expect, deciding to become an actual threat to the very existence of the galaxy means you’ll have to give up on any other goals and opportunities – this is kind of an “all in” proposition. Once you make that choice, though, you’ll start building up a new currency called Menace. You earn this by doing horrible things, and at certain thresholds of horribleness, you’ll have to take on special projects to unlock the next tier of apocalyptic evil.

More like this: There’s plenty more Stellaris DLC to check out

It’s a long way to the top if you decide to go this route, but Paradox explains that you’ll have some fringe benefits along the way that may help out. Each Crisis Level you unlock grants new Crisis Perks, and these come with the ability to field new types of ships or benefit from new bonuses.

The new ships include a Menacing Corvette, Menacing Destroyer, and something called a Star-Eater – which gets its name from the fact that it eats stars. You’ll need to be eating a lot of stars, because to complete your goal of destroying the galaxy, you’ll need the Aetherophasic Engine powered up with absurd amounts of dark matter, which you’ll harvest from stars that your Star-Eaters consume. 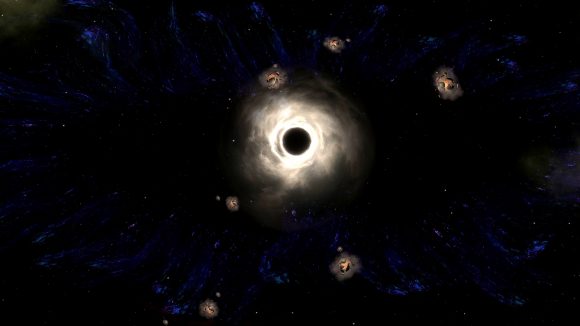 If you pull this off, then everyone else loses. Congratulations, you’ve destroyed everything!

Paradox hasn’t yet announced a release date for Nemesis, but we reckon it’ll be showing up alongside the 2.9 update, which we’ve already learned will have a heavy focus on espionage. You’ll be able to do stuff like arm insurgent networks in your enemies’ systems and run Bothan-style spy networks around the galaxy.

Buy Now: Now’s a great time to pick up Stellaris

Paradox’s expansion model generally times DLC releases alongside major free updates, so some portion of all this will of course be limited to the Nemesis expansion, while the other will be free for all players. We’re not sure yet how that all breaks down, but the prospect of getting to wipe the gameboard is an exciting one.

Stellaris: Nemesis will be released “soon” on PC via Steam and the Paradox Store, though pre-orders aren’t available just yet.