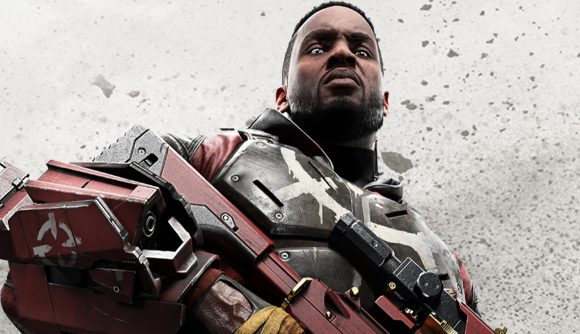 Batman: Arkham series creator Rocksteady’s new game Suicide Squad: Kill The Justice League will get a big reveal at DC Fandome on October 16 – but it seems like that reveal won’t be for any further playable characters, as the game will focus on “the four Suicide Squad members” already revealed.

It’s been over a year since the reveal of the Suicide Squad game and there’s barely been any news about it, now in the run-up to the big DC Fandome event details about the project are beginning to drop at last. Perhaps the most notable is that Suicide Squad: Kill The Justice League has been reconfirmed for a 2022 release – it still might slip, the same way that Gotham Knights did, but for now that’s good news.

Perhaps more surprising is that it seems that the four characters already revealed – Deadshot, Harley Quinn, King Shark, and Captain Boomerang – may be the only playable characters in the game, which casts doubt on the rumour that Suicide Squad will be a live-service title like Marvel’s Avengers.

According to the latest press release, it seems that Suicide Squad’s story is focused entirely around the characters we already know about, strongly suggesting that these will be the only characters playable – so anyone hoping to play as Idris Elba’s Bloodsport will have to do so in Fortnite instead. “The game’s original narrative follows the four Suicide Squad members as they take on an impossible mission to save Earth and kill the World’s Greatest DC Super Heroes,” the release states.

Look what we have here…
Tune into DC FanDome 10/16 @ 10:00am PT to see more. #DCFanDome #SuicideSquadGame pic.twitter.com/dGreeK4ToO

It also re-confirms that the gameplay will consist of “character-driven story gameplay with third-person shooter action”, which might be a shock to anyone still expecting to see a more melee-focused Batman: Arkham-style game like Gotham Knights. Regardless, Rocksteady is responsible for some of the best superhero games ever made, so we’re sure they know what they’re doing.