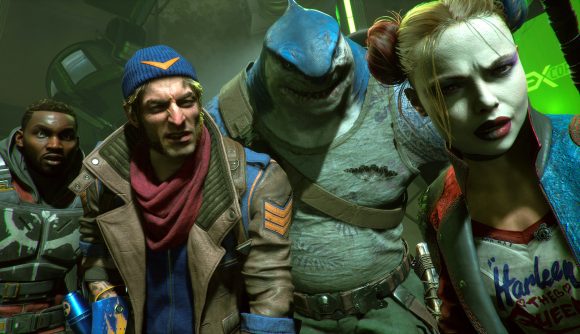 The first in-game Suicide Squad: Kill The Justice League screenshot has been released in advance of today’s big reveal at the DC Fandome event, which will presumably bring the first proper look at Rocksteady’s next game in motion. Even more intriguingly, however, is that the screenshot seems to hint at the involvement of Lex Luthor in the game’s story.

It’s been over a year since the announcement of Batman: Arkham developer Rocksteady’s long-awaited next game, Suicide Squad: Kill The Justice League – which was only shown off with a CGI trailer, unlike fellow DC co-op game Gotham Knights – and fans are eagerly anticipating a full gameplay reveal at today’s event along with more details on the game’s story.

As a tease for this, Rocksteady creative director Sefton Hill posted the first proper in-game screenshot of Suicide Squad: Kill The Justice League – and while it’s mostly focused on the four Squad members, fans have noticed a subtle tease in the background of the shot that seems to point towards Lex Luthor’s involvement.

Going by the logo on the green vat behind Harley Quinn, the Squad is currently exploring Lex Luthor’s company LexCorp – and while Lex’s building made a brief appearance in the background of the original trailer, this tease seems to indicate that LexCorp will be more closely involved with the game’s events than previously thought.

Aside from the setting of Metropolis, the focus on the DC universe’s villains, and the appearance of Superman, there is another precedent for the involvement of Lex Luthor in Suicide Squad. Rocksteady loves to tease its next games in its previous ones as Easter eggs, and Lex Luthor actually appears in voiceover for a Batman: Arkham Knight Easter egg.

Other than the fact that Suicide Squad: Kill The Justice League probably won’t have any additional playable characters beyond the four we know about, we know very little about Rocksteady’s next game or even really how it’ll play – so all eyes will be on DC Fandome later today for these reveals. Who knows, we might even get that Superman game announced at last.