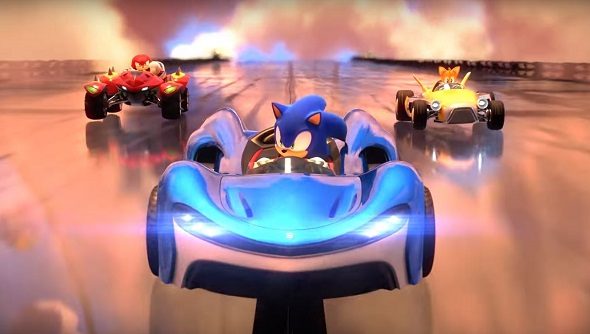 Sonic and company were at this year’s E3 with a new trailer for Team Sonic Racing, which shows some of the action we can expect to see in the upcoming kart racer. It’s our first look at several of the environments and cars coming when the game launches later this year.

Most of the trailer’s footage shows a course set in a forest, which makes sense – most Sonic games have had at least one forest-themed level. Sonic, Shadow, Tails, Knuckles, and the rest of the gang speed over tracks that take them through hollowed-out trees, bumping and sideswiping each other to get ahead. Another shot shows a Sky Chase Zone track, which drops precipitously like a rollercoaster through pink-tinged clouds.

Faster is better, both for Sonic and for cars. Here’s our list of the best racing games on PC.

There’s a hint at some vehicle physics, too. At around 0:40, Sonic and Shadow can be seen power-sliding in tandem around a corner. A slow-motion closeup shot of Shadow’s front right tire shows the rubber tearing from the strain in high detail. That could mean that cars’ handling can change over the course of a race – but it also could just be a bit of pre-rendered sizzle.

Team Sonic Racing is focusing in on cooperative play, and one of the features it’s introducing to the series is “team moves.” It looks like Sonic is activating one of these at about the 0:55 mark, giving his squad a coordinated boost as they head into a huge jump on the track (also note the Big-Ben-style clock tower in the background in this stage).

Without further ado, here’s the trailer. It’s set to a punky new track from Crush 40, who’ve been making Sonic music for quite a while now.

Sega hasn’t set a firm release date for Team Sonic Racing, but it should be out this winter in time for the holidays. There’s aSteam pageup now, so you can head there to add it to your wishlist. It’ll also be available on Xbox One, PlayStation 4, and Nintendo Switch.