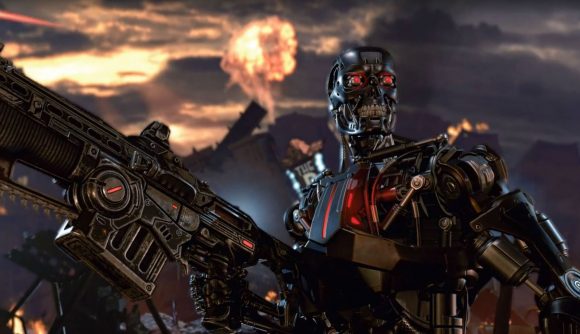 Buy any edition of Gears 5 or grab it through the XBOX Game Pass membership before September 16 and you’ll get the chance to play two characters you might not have expected: Sarah Connor and the Terminator. Y’know, from the movies. The Terminator Dark Fate character pack, just unveiled at Microsoft’s E3 conference today, will let you play the two icons as multiplayer characters.

The trailer, which we’ve included below, shows the Terminator T-800 Endoskeleton standing triumphantly in the burning remains of a city, surrounded by skeletons of some unlucky victims, red eyes aglow with malice. Oh, and he’s holding a pretty terrifying gun with what looks like a chainsaw part whirring underneath the barrel.

Gears co-creator Rod Fergusson says on Microsoft’s website that “with the T-800 Endoskeleton, our goal was to embody the iconic qualities that everybody knows”, adding “but at the same time we were given the freedom to make it our own, including subtle changes like emissive lights that make it a great character for multiplayer, and the larger proportions — a signature characteristic of the Gears of War universe”.

Sarah Connor doesn’t appear in the E3 trailer – hopefully we’ll get to see some gameplay of her sometime soon. The pack is a tie-in to the upcoming Terminator Dark Fate movie, which will hit cinemas on November 1.

This follows exciting news of the Gears 5 release date, plus its new multiplayer mode, Escape, which series fans will want to check out.

Excited for more E3? Check out our guide to the full conference schedule so you’ll be ready for the action to come.