The Elder Scrolls Online’s new year-long adventure begins in just a few days. The Gates of Oblivion will open, taking us to The Elder Scrolls IV’s fiery hellscape, the Deadlands, not to mention a few other iconic locations from the main RPG game series’ past. We’ll also head into arcane, untrodden ground with its first DLC, Flames of Ambition.

There are two dungeons in the pack: Black Drake Villa and The Cauldron. The former is a foray into a dilapidated villa to find a powerful artifact, while the latter tasks you with disrupting a powerful cult of Daedra worshippers. Of the two, I opt to play through Black Drake Villa, with the MMORPG‘s lead encounter designer, Mike Finnigan; lead content designer, Jeremy Sera; and creative director Rich Lambert as my guides.

The titular villa is formerly of the Longhouse Emperors, a fallen dynasty of Cyrodiil-ruling Reachmen, and it’s teeming with trouble. Finnigan promises a secret library nestled beneath the villa, a mysterious tome packed with ancient knowledge, and the appearance of a fan-favourite character in Eveli Sharp-Arrow. So, off to the villa we head.

The exterior belies the danger within. The sprawling complex is like a jewel hewn from Cyrodiil’s Gold Coast – a Roman-inspired villa with columns, towers, and domes that would have screamed wealth in their heyday. Now, it plays host to a nasty band of mercenary lodgers called the True-Sworn. 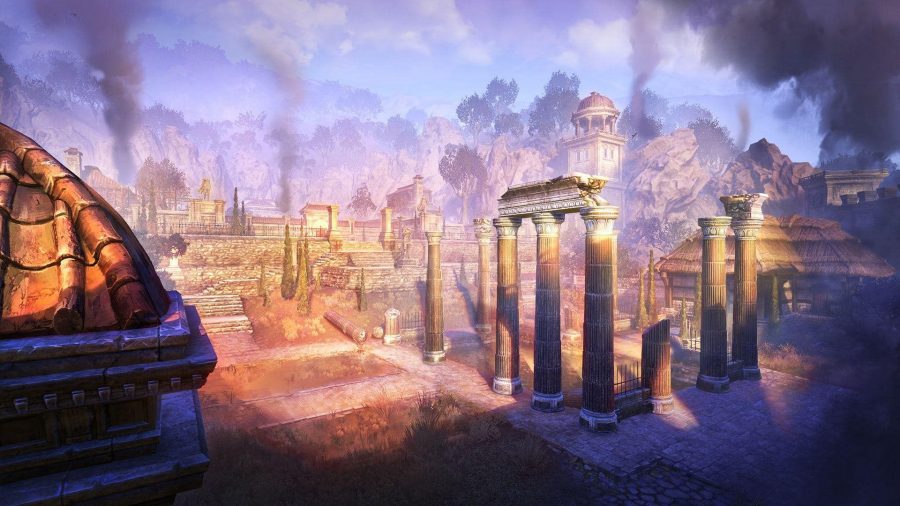 In addition to the True-Sworn, goblins and beasts greet us at the gates, so we begin the bashing in earnest. Next we put groups of jumped-up Ironeye Sorcerers and Ravagers in their place, while I eye up some of the signposting the ESO team loves to sprinkle into the early stages of their dungeons – signs of mechanics and mischief to come, like the scythes in Skyrim’s Castle Thorn.

In this case that signposting manifests as some smoking vents and flaming salamanders. Right on cue, a band of baddies lit up with a fiery orange aura charges at us, which Finnigan confirms is the result of a buff the salamanders confer when nearby. If previous dungeons have taught me anything it’s that this is just the tip of the iceberg as far as this mechanic is concerned.

Speaking of upcoming horrors, Black Drake Villa embodies ESO’s new style of dungeons, featuring three bosses, each with their own hard mode for veteran players who crave a fresh challenge. The first of these, the minotaur Kinras Ironeye, is waiting for me in the next courtyard.

Kinras Ironeye stands looming at the far end of the arena, brandishing a studded club as big as me. There are fiery red AoE spots to dodge as I close space and attempt to get a hit in. As if his girth wasn’t enough of an advantage, the beast starts planting totems that fire shots at the party while he goes about turning us into pâté. 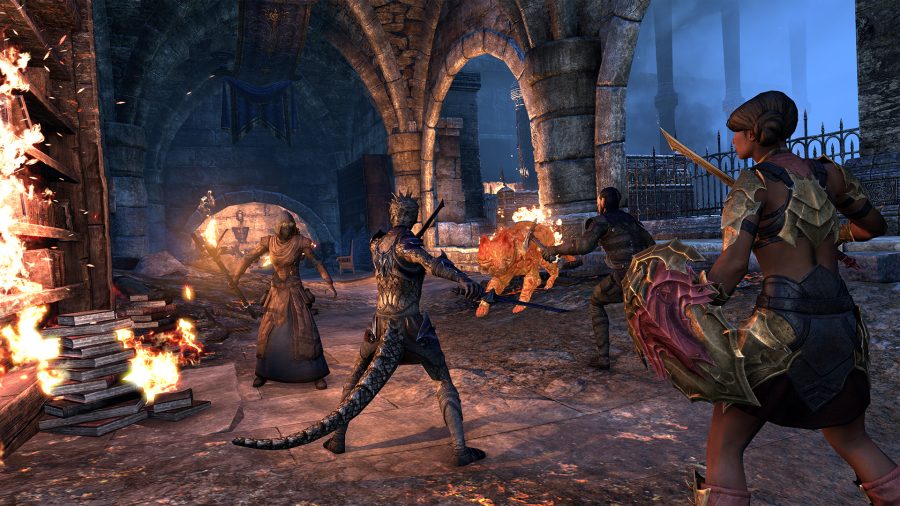 Those flaming salamanders we encountered earlier? Well, they’re back, and waddling over to Kinras with a piping hot delivery of buffs. Now the party is split between slaying amphibians and keeping Kinras busy. He also chucks his club across the courtyard at times, scattering us and ensuring the battle is a highly mobile affair.

Minotaur down, we head inside to find the library. At this point we can explore the main building more, but Eveli insists we sniff out the tome, so we oblige and hop through a trapdoor into the villa’s secret basement. It’s a cavernous chamber that reminds me of Fable III’s Reliquary. The shelves are lined with weighty tomes and around the library piles of research papers and volumes burn, filling the chamber with smoke.

The villa is like a jewel hewn from Cyrodiil's Gold Coast

As an English lit graduate, seeing countless books ablaze cuts me deep. Sucking up my misery, we push through waves of True-Sworn guards and flame hounds, passing some mysterious floating orbs and a statue-based puzzle, which Finnigan insists are both worth investigating when the DLC releases. Somewhere along the way we grab the ancient tome we set out for, but I must have been too distracted by all the burning literature to notice.

Book in hand, Eveli leads us to the next boss: a True-Sworn leader called Captain Geminus. Her ‘lair’ is a gladiatorial arena housed under an enormous, cracked dome that allows just enough light to filter in. Captain Geminus is an archer, but she’s got some fiery tricks up her sleeves, too. This fight is almost like a bullet hell game, with huge waves of fire to dodge between piercing arrow shots. Around the arena casters lob curses at you that obscure your vision if they connect. Oh, and there’s an air atronach in the middle of all this, haranguing you with melee attacks. 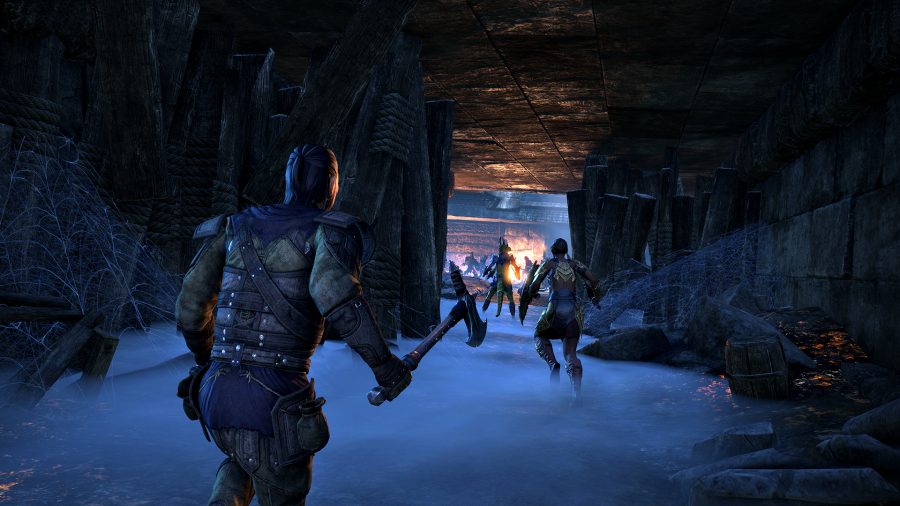 Again, this battle is all about staying mobile and shifting around the arena. With the captain stamped out, we head to our final encounter through the villa’s garden, using some water-powered trampolines to reach the higher levels. En route we take down some towering fire behemoths, burning spectres, mudcrab-throwing trolls, and ice salamanders before discovering the dungeon’s headline act: Pyroturge Encratis.

Lurking in a deceptively idyllic garden space, flanked by dragon statues and murals, the final boss is here for one reason: to burn the place to the ground. As we rush him he conjures flame salamanders and blistering streams of fire from his hands. After we manage to deal a slither of damage, he whips up a fiery vortex, which threatens to engulf the whole party. He can also cast a very similar AoE attack that burns me to a crisp if I don’t immediately cosy up to him in, so managing distance and reacting quickly is essential here.

Pyroturge Encratis is not all that mobile to begin with, but this is a multi-part, multi-location fight, and as we move to the next location the battle speeds up. With his health reduced to around 75% he blows the garden to smithereens and escapes to yet another cavernous, multi-level arena space for the final showdown. 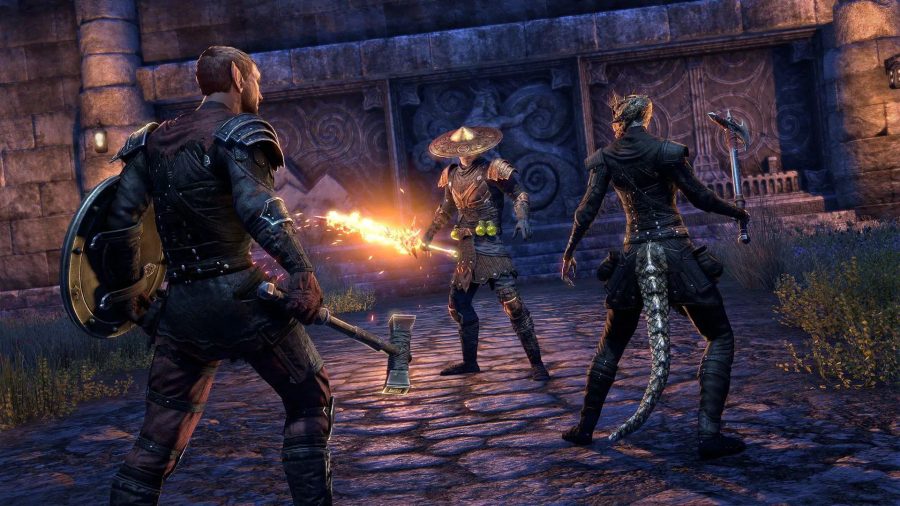 Here, he intermittently teleports to safe spots and the entire upper ring of the chamber glows red, signalling imminent death for the party. To escape, we hop down to the lower level, which is where those water-powered trampolines make a reappearance, and I have to judge when it’s safe to boing back up to the upper ring to resume clobbering the boss . Fire behemoths, salamanders, burning spectres – they all turn up throughout the fight to make things harder, but eventually we get the job done.

At last, Encratis is vanquished. It’s a rewarding end to the dungeon, which boasts plenty of challenges and offers more than enough variety to keep us on our toes. And this is a relatively rushed playthrough – I’m shown piles of intact books to leaf through that promise to shed more light on the Longhouse Emperors, and there’s a network of hidden paths ripe with secrets to uncover.

Alas, my time in Tamriel is up for now, so they’ll have to wait. The pack’s other dungeon, The Cauldron is just around the corner. Flames of Ambition launches on March 8 for PC, and March 16 for our friends on console.