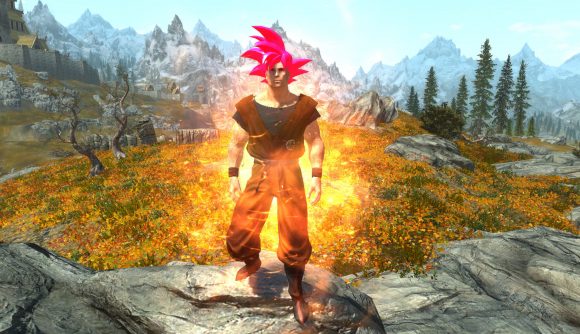 We’ve seen plenty of wonderful Skyrim mods over the years with vastly different levels of scope. Some mods just improve textures, like this one that makes your character filthier as you play. Others, like Morrowind Rebirth, are full recreations of previous Elder Scrolls game regions. We’ve come a long way from replacing Aldiun with Randy Savage or Thomas the Tank Engine, but what if we told you that there’s a way to go beyond being just a regular Dragonborn?

The forms are not just a stylistic choice. While they are, “technically helmets with powerful enchantments on them,” each one adds some powerful buffs to your base stats. Some of the six forms have appropriate drawbacks, such as ‘Super Saiyan 3’, which drains ten health points every second.

You’ll need to own both the Dawnguard and Dragonborn expansions in order to run the mod, but once you’ve installed it via Nexus Mods, you’ll then just need to activate each form through the console.

While this transformation mod is purely for stat boosts, if you really want to go all out, you might want to pair it with this Dragon Ball and Naruto Spell Package mod. After all, the Dragon Ball experience isn’t complete without the ability to hurl Kamehameha at those pesky giants.