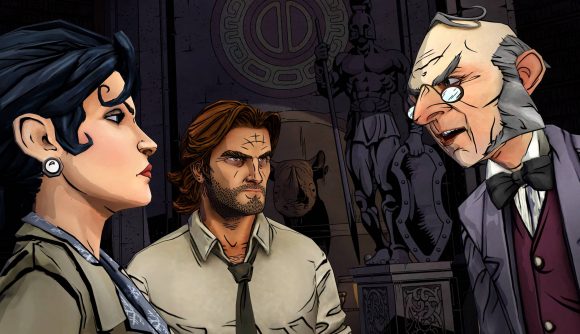 The Wolf Among Us 2 lives! After getting uncancelled with a teaser trailer back at The Game Awards in 2019, the sequel to Telltale’s take on the Fables comic series has been quiet for a long time. But after announcing a new series based on The Expanse two months ago, the new Telltale promised that news on Wolf 2 would soon follow, and they’re making good on that promise this week.

Geoff Keighley will host a behind-the-scenes look at The Wolf Among Us 2 this Wednesday, February 9 at 10am PST / 1pm EST / 6pm GMT, streaming on Twitch and YouTube. The event is being promoted with the line “Greetings from Fabletown,” and Keighley confirms that we are “getting a brand new trailer for the game”.

If you’ve not been keeping up, the old Telltale shut down in 2018, but the name and its licenses were picked up by a holding company called LCG Entertainment in 2019. Wolf Among Us 2 is being co-developed with a studio called AdHoc.

In a Game Informer interview a few weeks ago, the new Telltale says Wolf Among Us 2 is now in full production. AdHoc co-founder Nick Herman said that “creatively, it’s had the most time in the oven out of any Telltale game ever, so we hope that comes through in the final product.”

Streaming live Wednesday 2/9, 10am PT on Twitch and YouTube#TheWolfIsBack pic.twitter.com/GoBIUWutMn