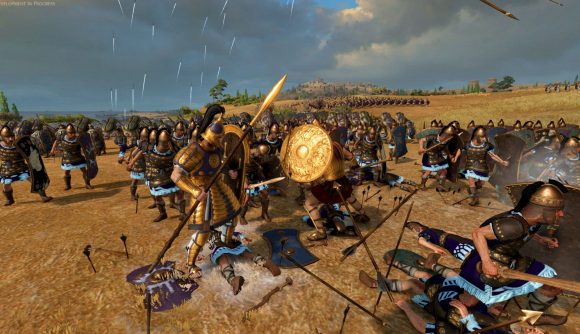 Total War Saga: Troy doesn’t have official mod support yet – that’ll likely be coming later this month – but don’t let that stop you from doing a bit of tweaking around the edges. We’ve found a handy camera mod that lets you zoom right in on those luscious Greek battles featured in Troy, along with a few others that ‘adjust’ a couple of the game’s mechanics, depending on your taste.

CathayZero has created a suite of mods for Total War Saga: Troy, and the one everyone will want to download right away is the battle camera mod. It’s one that comes out for just about every Total War title now, and it removes the default limits on the zoom levels when you’re fighting the strategy game‘s real-time tactical battles.

Using the mod, you can get right up close to the hand-to-hand fighting at the gates of Corinth, for example, or see how tall those big Cyclops units stand when they’re lined up next to some hapless levy spearmen. The battle camera mod is one of the must-haves for most Total War players, even if they don’t usually engage in any of the more game-altering modding out there.

CathayZero has some other choice mods available as well: there are mods to reduce the experience required to level up characters by 30%, one to speed research up by 100%, a mod to remove the prerequisites for recruiting legendary units, one that removes the diplomatic penalty associated with being a ‘strategic threat’, and one that lets you start building the Trojan Horse on Turn 1.

Some Troy mods I made. from totalwar

All handy stuff, certainly, depending on how you want to play your game. You can download the battle camera mod from Nexus Mods, or you can get the whole lot of them from CathayZero’s Reddit post above. Pop the appropriate mod file(s) into your Total War Saga: Troy data folder, and you should be ready to roll.

Once official modding support arrives for Troy, we expect we’ll see a lot more of this kind of thing, creating the robust kind of list we have for Total War: Warhammer 2 mods, for example. Until then though, these ought to keep you content as you storm the gates of Troy to find out what that dastardly Paris has been up to.