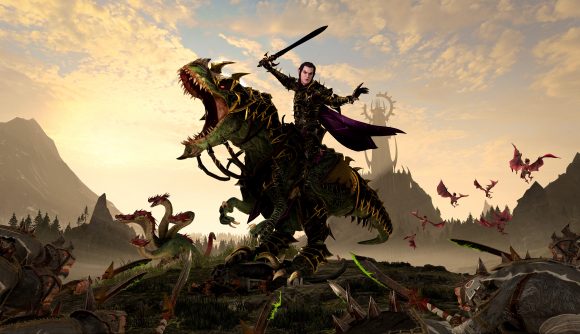 A new Total War: Warhammer 2 patch is due to drop today. Titled the ‘Rakarth’ update, it’s releasing alongside a free DLC pack that introduces Dark Elf beastmaster Rakarth as a new legendary lord.

He’s currently only available via Total War Access, but he’s still free, so that’s pretty neat. Better yet, the patch that he’s given his name to is filled with a bunch of quality of life improvements. Forge of Daith 2.0 is front and centre, and the team have taken another stab at the highly controversial feature. Instead of being driven by events, players will now have more visibility and more choice with regards to which item they want.

As a consequence, several items have been nerfed to prevent them becoming overpowered thanks to this newfound agency. It’s recommended that any in-progress Sisters of Twilight campaigns be restarted to avoid any conflicts. There are plenty of other campaign balance changes as well, with a lot of love shown to the Dark Elves as a whole, as well as the Skaven. There’s also a new slate of unit balance changes for tactical battles.

Perhaps our favourite patch note is found in the ‘other bug fixes and campaign balance changes’. Apparently Drycha, one of the Wood Elf heroes, has a tendency to scream a lot on the campaign map. 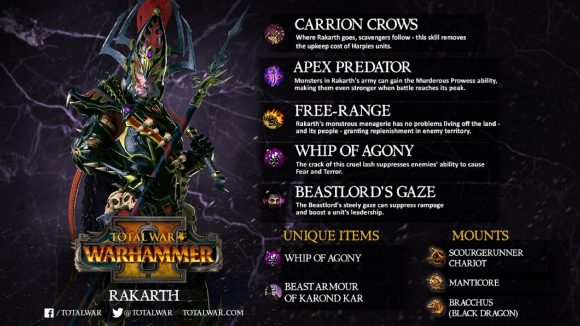 They’ve now been told to shut the hell up: “Drycha has calmed down a bit and will now scream less frequently on the campaign map.” Keep an eye out for when the Rakarth update drops later today at 4pm GMT, and don’t forget to claim Rakarth himself for free if you haven’t already.