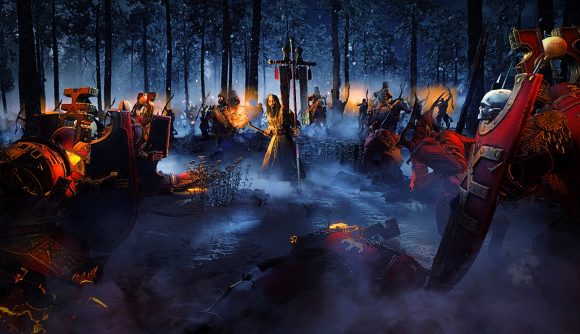 Creative Assembly has confirmed that a datamined version of Total War: Warhammer 3’s combined map is actually a “very old prototype”. The strategy game’s spin on the Mortal Engines map will be “big”, though “nothing else is final at the moment”.

Not long after the game launched, fans pulled a vast list of regions from the new PC game’s files. While we know that Ind, Nippon, and Khuresh are “probably never” coming to Total War: Warhammer 3, the datamined list still suggested a hulking mass of land to conquer could be on the cards. According to Three Moves Ahead producer Leana Hafer, the list featured “about 40% more total settlements than Mortal Empires”, which would have been pretty wild. A picture of the map itself was also dug up, which gave us a sense of its scale.

A representative of Creative Assembly who goes by the username Pete_CA then confirmed on Discord that the datamine is a “very old prototype version of the map”. They do add, though, that the combined map “will be big”, though “nothing else is final at the moment”. So sit tight, folks.

Creative Assembly has previously confirmed that it’s working on a new, big map that combines all three Total War: Warhammer games. More details will come “later”, though it will be “huge free DLC” to those who own all three games.

Referring to the strategy game’s version of Mortal Empires, game director Ian Roxburgh told us the following in our Total War: Warhammer 3 interview: “It’s definitely coming, and it’ll be everything we promised – all three games combined. We’re not going into detail about the shape it’ll take yet, but rest assured it’s still the ultimate culmination of the vision behind the trilogy. I don’t think the map will be much bigger, because the map in Warhammer III is twice as big as before, and bigger than Mortal Empires.”

Total War: Warhammer 3 is out now. While some players report performance issues, the game is being reviewed well. We gave it a nine-out-of-ten score in our Total War: Warhammer 3 review, with editor Rich remarking that “Creative Assembly leaves everything on the field in this ambitious conclusion to the Warhammer trilogy”.

If you want to find out more about the Total War: Warhammer 3 DLC on the horizon, you can follow that link.