While it’s early days, we’ve put together a guide collecting everything we know so far about Warhammer 3 DLC. So far, the only major insight we have into Creative Assembly’s plans for the game come from a developer roadmap released in May 2022. We also indulge in some speculation in terms of what we think could be coming down the line.

There are also a few bits that, while not announced in the formal sense, have been confirmed as being on the way at some point after launch, so we’ve included all the details we know so far about those too. Without further ado, here’s everything we – and now, you – know about Total War: Warhammer 3 DLC. 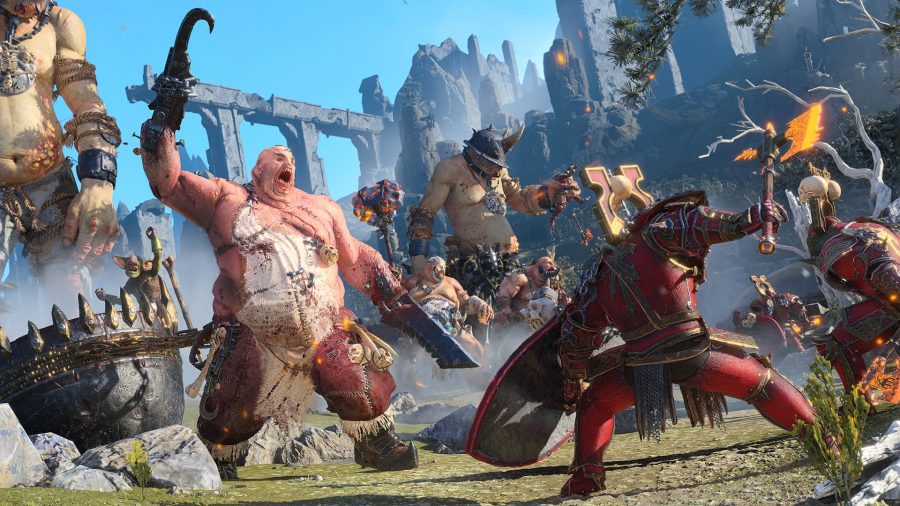 Total War: Warhammer III’s first expansion adds the Ogre Kingdoms as a playable race. When the game was first announced a free race pack for early adopters was also confirmed, but it wasn’t until much later that we learned that the race pack was going to be the gloriously gluttonous Ogre Kingdoms (although the inclusion of Ogre mercenaries in Warhammer II was a bit of a giveaway).

The Ogre Kingdoms come with two playable legendary lords – Greasus Goldtooth and Skrag the Slaughterer. It’s available for free to players who pre-ordered or purchased the game before February 24, and is otherwise available to purchase separately as a DLC pack.

The Ogre Kingdoms’ campaign follows the same thread as the launch races – they want to decide the fate of Ursun for themselves, although in this case ‘decide the fate of Ursun” basically means ‘eat God-Bear for Dinner’, which is very on-brand. Still, this means their campaign follows the same line as everyone else’s – forge an empire, go into the Chaos realms to claim the souls of the four Chaos gods, and then defeat Be’lakor in the final climactic battle.

Their campaign mechanics are amusing, their roster reasonably powerful in the early game, and you’re given a lot of tools to do a lot with a relatively smaller empire than other factions may be able to forge. You’re not going to have many allies on the campaign map, so you’ll need to make the most of whatever space you can carve for yourself. If you like the idea of these man-eating monsters, then this Warhammer 3 DLC pack will more than likely live up to your expectations. 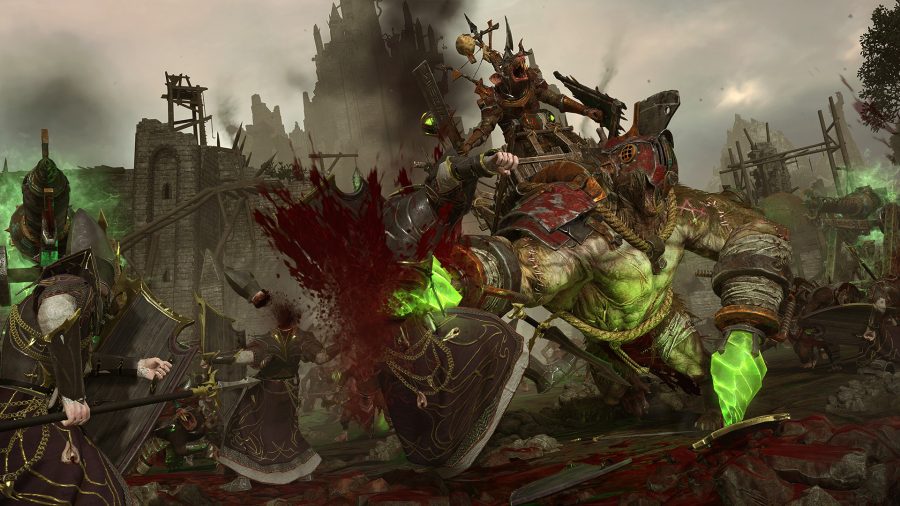 In case you’re unfamiliar with the premise, this is the obligatory ‘blood pack’ micro-DLC pack that introduces blood and gore visual effects into the game. Keeping these gruesome bits in an optional content pack isn’t popular with some players, but Creative Assembly maintains that this separation allows Total War games to pass through certain age-rating hoops far easier. It’s not going to be an essential purchase by any means, but these packs are usually quite cheap.

This pack is duet to release between July – September 2022 as part of Creative Assembly’s plans for Q3. According to the current roadmap, it’s due as part of the 2.0 update wave, which will include the first beta for Immortal Empires and the game’s first Lord pack. Speaking of which… 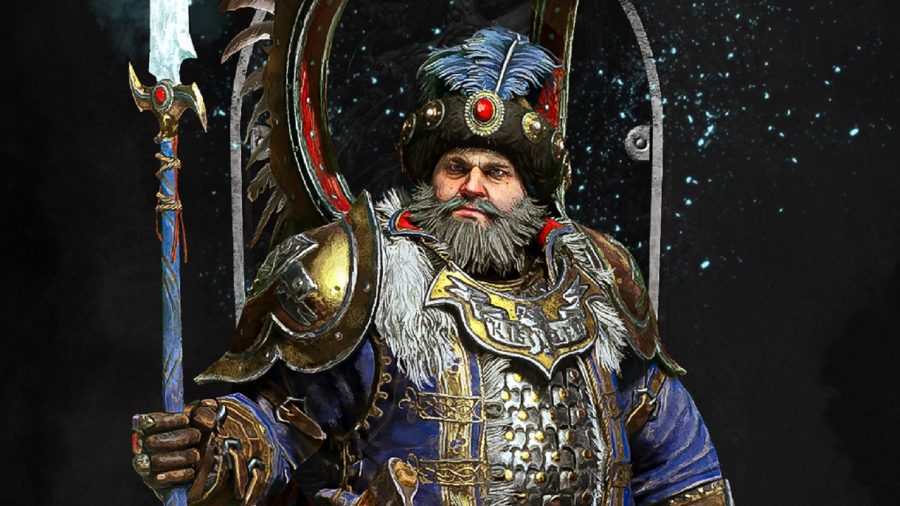 This is the first confirmed new Lord pack since the game launched in February 2022. All we know about it so far is that it will introduce “several new Legendary Lords, Lords, Heroes, and a variety of units to deploy across the Grand Campaign and multiplayer settings.” The developer update also makes reference to “four new champions” joining the roster.

All we know for sure is that it’s launching alongside the 2.0 update wave, which is due sometime btween July and September 2022. It will arrive around the same time as the Immortal Empires beta and the Blood pack.

It’s possible – but highly speculative – that this Lord pack could feature new lords for the Warriors of Chaos. Our only basis for this is that the 2.0 update will also introduce the first ‘Old World’ update. This is a series of updates designed to bring unloved elements from Warhammer I (or Warhammer II) into the modern era of Warhammer III. Recent precedents include the Beastmen rework towards the end of Warhammer II’s support cycle (which was accompanied by new DLC lords), as well as the free update for the Wood Elves faction.

The developer update confirms that the Warriors of Chaos will be the first target for this inaugural Old World update, and what better time to give this neglected faction some new premium lords via DLC. 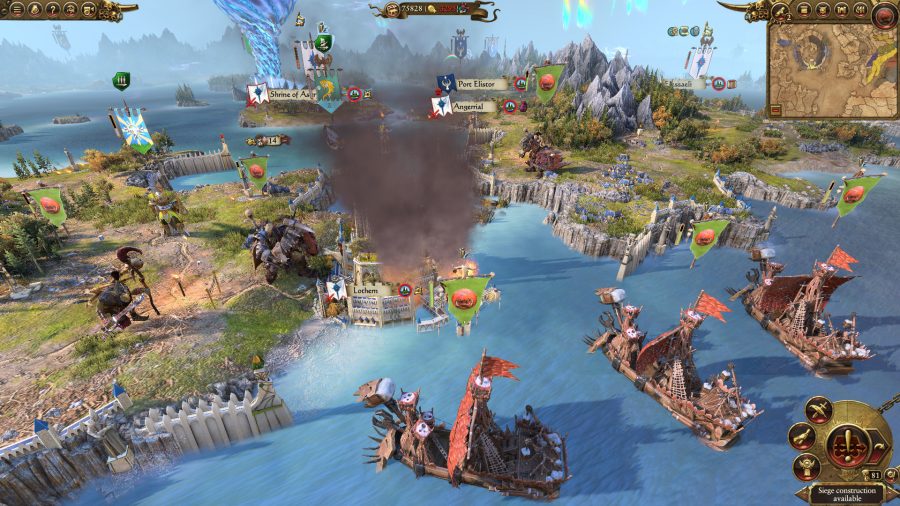 Creative Assembly has confirmed that a big map combining all three Total War: Warhammer games is coming, but that it wasn’t planned to be ready for launch. What it will look like is currently unknown, but we now know that it’s due to release during Q3 2022. More specifically, it’s due as part of the 2.0 update, which means it will likely launch towards the middle of this period at the earliest. It’s going to launch as an “integrated beta” to begin with while the developers gather feedback and test.

These big campaigns are officially released as DLC, and not just a standard update, which is why we’re listing it here. The 2.0 update will also bring the first post-launch Lord pack, the Blood pack, as well as plenty of free content updates, so there’s going to be a lot going on in Warhammer 2 during this period.

Read our Warhammer 3 Immortal Empires guide for the latest information. 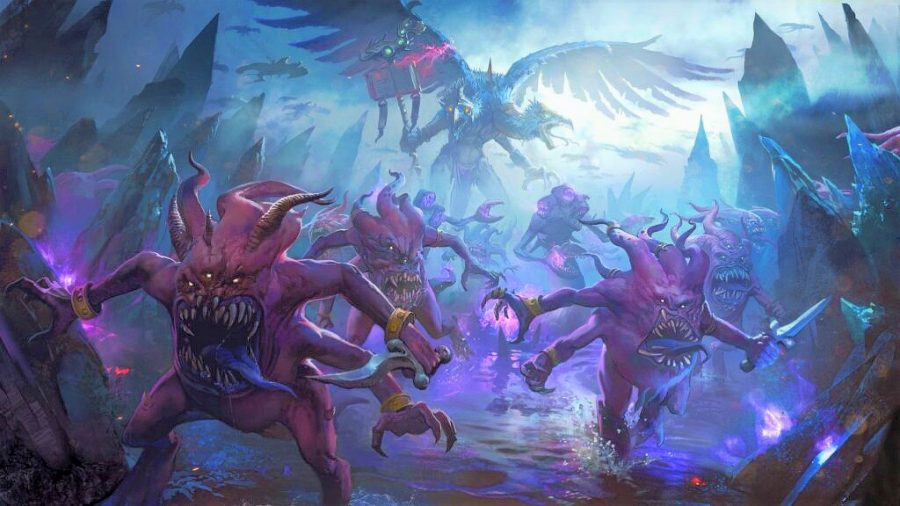 In addition to the DLC already announced, we can make some educated guesses on future Warhammer 3 DLC based on what Creative Assembly has said in the past, and on what we already know about the tabletop factions which have a presence on Warhammer III’s map but are currently missing. However, this is all speculative – Creative Assembly may have other plans entirely, of course.

The Chaos Dwarfs are probably the biggest absence from the Total Warhammer series right now. Back in the tabletop game’s fifth edition, they got a range of models and an official rulebook (albeit a small one released in drips via Games Workshop’s magazine, White Dwarf) – altogether, it’s more official material than the Vampire Coast or Norsca had. The Dawi’s dark cousins canonically inhabit the volcanic Dark Lands, where you’ll currently find factions like the Dark Land Orcs – it’s a sizable chunk of Warhammer 3’s map and ripe for the Chaos Dwarfs’ arrival. Expect them to arrive as a fully fledged race pack before too long.

These were one of our Warhammer 3 race predictions back when there was a lot we didn’t know about the game. Technically, these guys are already in the Total Warhammer games as Chaos Dwarfs can be seen crewing the Hellcannons of the Chaos Warrior faction. Voice files for Chaos Dwarfs have supposedly been datamined from the Warhammer III game files as well, so the plot thickens.

This makes the most sense considering we’ve only really been treated to parts of the western and northern stretches of the Celestial Empire so far. The Dragon Emperor has children other than Miao Ying and Zhao Ming, and there’s plenty of landmass that can be added to the east and south of what we see currently in the Realms of Chaos campaign.

Given they’re the shiny new faction in Warhammer III, it would be weird if they didn’t get some post-release support and principal writer Andy Hall has all but confirmed more Cathay content for the new strategy game.

Similar to how there’s plenty of Cathay left to explore, it’s worth remembering that each of the four Chaos factions only has one Legendary Lord each right now, with the Daemon Prince as an unofficial fifth heading up the Chaos Undivided faction.

There’s plenty of other prominent Chaos lords that could be brought in to feature as antagonists for Lord packs. We’d be surprised if Chaos gets a major expansion or rework, given how much attention it got at launch, but you could almost bet money on new Chaos Legendary Lords being introduced one way or another.

Hobgobla-Khan and the Hobgoblin Empire

The Hobgoblin Empire is Warhammer’s equivalant of the Mongol Empire, with Hobgobla-Khan a not-so subtle nod to Genghis and his dynasty. According to the lore, they hail from the Eastern Steppes which is now in the game. They’re the wasteland past the Great Bastion where the Chaos forces who routinely attack said bastion spawn. Those forces are named after the Chaos-tainted human tribes of the Steppes, specifically the Kurgans and the Hung.

The Hobgoblin Empire is supposed to be the biggest Greenskin empire in the Warhammer world, and our resident Warhammer expert Rich suggests that this will be the means by which Creative Assembly introduce playable Greenskins to Warhammer 3’s campaign, just as Markus Wulfhart’s expedition introduced the Empire to Warhammer 2’s Vortex map. This could be done via a Cathay vs Greenskin Lords pack, although perhaps a full-on expansion might give the Greenskins as a whole a big splash into Warhammer III’s campaign map.

Given the location of Total War: Warhammer III main campaign, there are plenty of races and factions that you’ll encounter that aren’t playable. There are several notable characters who could be used to introduce their respective races, including (but not limited to):

There are plenty of other factions as well, such as Dawi Dwarves, the Norscan tribes, even Bretonnia and the various shades of Elves. We’d be very surprised if these fine folk didn’t get dedicated updates that brought them more formally into the narrative with playable legendary lords.

Whether or not they’ll have campaigns that also focus on Ursun remains to be seen. Later Warhammer II DLC races got their own bespoke campaigns that had nothing to do with the central ritual. We may not see everyone – for example the Lizardmen and Tomb Kings mainly exist in localities far from where the action takes place currently – but Warhammer II’s The Hunter and The Beast DLC did prove you can introduce a non-local faction to a new locality if desired.

That’s everything we know about Warhammer III DLC so far. Check out some other great Total War games, or if fantasy is more your thing, our guide to the best fantasy games on PC.