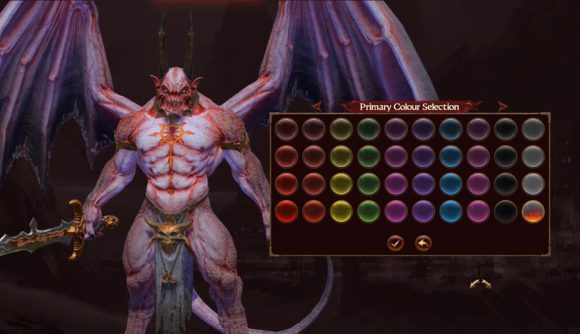 If you opt to lead Chaos Undivided in Total War: Warhammer III, you get to meet the daemon prince who is now lovingly known by the player community as Daniel. Unique amongst the strategy game series’ legendary lords, Daniel is fully customisable – well, almost fully. While you can unlock new arms, legs, horns, tails, and other various bits and bobs for Daniel, you can’t control his skin tone… until now, that is. Thanks to the power of mods, now you can paint Daniel any colour you like.

The Daniel Painter mod by Marthenil gives you a nice palette of daemonic colours to use on your prince of chaos. While the colour selection is fairly basic, it covers the standard range with several shades per colour. If you’re feeling a bit Nurgly, you can go with a sickly yellow or bilious green hue, while the Khorne-likers will probably stick with the more classic daemon candyapple red.

You can pick both primary and secondary colours for your daemon prince, too: the primary colour works pretty much like a base coat, with the secondary colour acting like a wash on top, that fills in all the nooks and crannies in the prince’s model.

Here’s how it looks in-game: 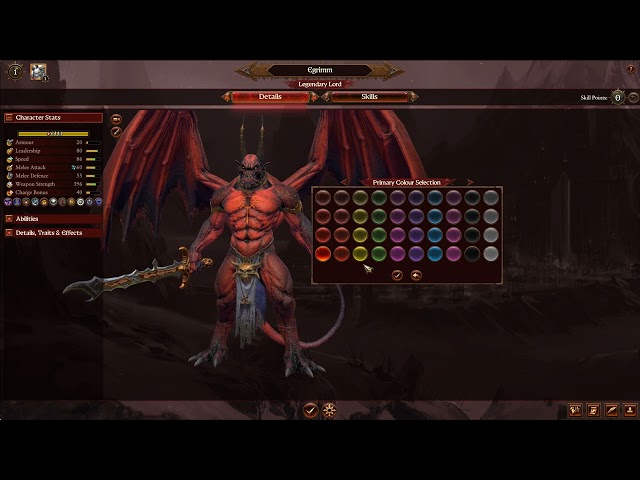 To customise your daemon’s colour scheme, you simply have to open their character sheet and click the paintbrush icon you’ll see on the left-hand side of the character viewer. The arrow buttons at the top of the palette will swap the working layer between the primary and secondary colours.

Modder Marthenil says a tool for adding custom colours is in the works.

We should hear more about the coming year’s worth of DLC when the Total War: Warhammer III roadmap is revealed April 29.