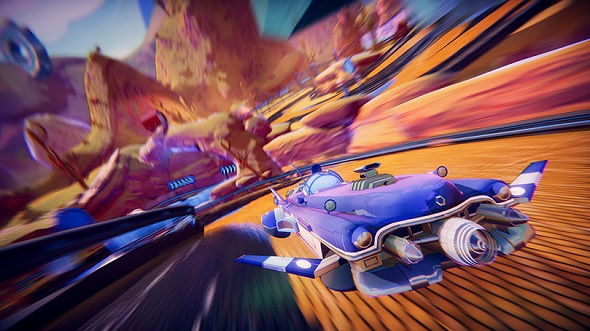 Here’s something fresh: a co-op arcade racer where you paint the track as you speed along, then use your streaks of paint to boost around on subsequent laps.

If you prefer your cars a bit more grounded, here’s our list of 2018’s best racing games on PC.

That’s the concept behind Trailblazers, and you can check out the action in the new trailer above. It’s fun, flashy, and appropriately colorful, with cool-looking retro hover cars and human and alien drivers who include a space frog and chameleon grease monkey.

According to developers Supergonk, Trailblazers pits you in 3v3 races where teams compete to paint the track their color. When you’re over your team’s color, you can boost, which adds an interesting layer of strategy and tension to the racer: do you follow your teammate’s suboptimal course and boost, or paint a better line around that tight turn?

It also looks like each of the game’s vibrant tracks has multiple pathways, so it will probably be important to communicate about which shortcuts or alternate tracks to take as you speed along. Handy, then, that it’s playable in local multiplayer in split-screen.

Trailblazers is due out May 8, and it’ll be available on PC, Mac, and Linux as well as Xbox One, PlayStation 4, and Nintendo Switch. Check out the official site for more info.