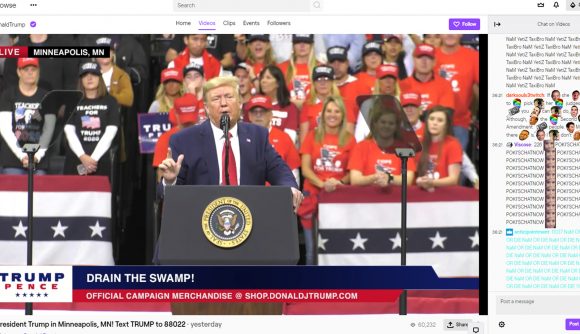 The U.S. president had previously been temporarily suspended from Twitch, with the platform citing “hateful conduct” that appeared on the channel officially associated with the U.S. president’s re-election campaign.

Twitch flagged videos of the president’s recent rally in Tulsa, Oklahoma, and the 2015 press conference in which he claimed without evidence that Mexico was sending drug dealers and rapists to the United States. Both were recently broadcast on the president’s channel. In comments to The Verge, Twitch said that all content creators on the platform are subject to the same rules. “Like anyone else, politicians on Twitch must adhere to our Terms of Service and Community Guidelines. We do not make exceptions for political or newsworthy content, and will take action on content reported to us that violates our rules,” a spokesperson told The Verge.

The statement draws a direct distinction between Twitch and Twitter, which last year clarified its rules to exempt elected officials from some of the content restrictions it places on the rest of its users. This ‘public-interest exception’ clause has been Twitter’s explanation for opting not to take action when Trump and other elected leaders have made inflammatory remarks, false claims, or have directed harassment at private citizens.

Trump’s suspension came just days after Twitch permanently banned DrDisrespect, one of its most popular streamers. Both moves follow Twitch’s announcement that it was stepping up action against accounts linked to abuse and harassment allegations, particularly the raft of new accusations against prominent influencers and developers that arose last week.

The Trump campaign launched its Twitch channel in 2019, and it quickly amassed thousands of followers. Twitch has not specified the length of the suspension.