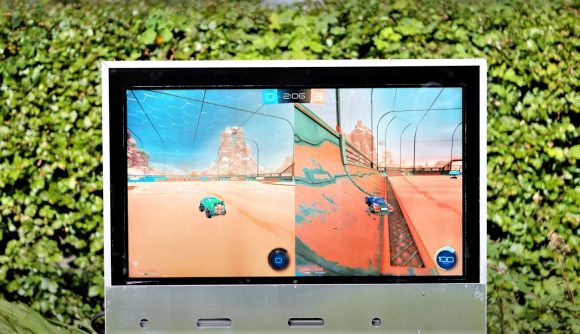 Modern-day screen tech has come a long way, especially when it comes to high-resolution gaming monitors and speedy refresh rates. Yet, no matter how good your display is, using it outside is going to prove near impossible, especially during a bright sunny day. Well, brace yourselves, as a fan favourite YouTube tinkerer has conjured up an ultra-bright display that makes playing Doom in your tranquil backyard a reality. Best of all? The marvellous monitor actually requires water cooling.

Created by DIY Perks, the contraption is essentially a recycled 4K TV that’s customised to support LED panels that are four times brighter than a conventional TV. Naturally, modifying a TV to support floodlight levels of brightness isn’t exactly straightforward, and the heat generated by the panels and power supplies involved is probably enough to heat your front room – or, y’know, start a small fire. So, it makes sense that the YouTuber would opt to water cool this bright idea.

Of course, just like the rest of the build, the screen’s water cooling setup is also highly unconventional. While gaming PCs typically use AIO coolers, this monitor actually uses a car radiator, a host of plumbing fixtures, a custom aluminium shell, and an elaborate waterfall style reservoir that pulls heat away from the panel. The entire build is also waterproof, meaning it can be left outside without having to worry about the weather forecast.

Now, we know what you’re thinking; why would anyone want to make a screen like this? Well, as Matt from DIY Perks explains in the video, the TV’s newly acquired high wattage lighting means it’s viewable even during broad daylight, making it perfect for outdoor shenanigans. The new LEDs also apparently extend the display’s colour gamut beyond its original sRGB capabilities, but since the screen is so bright, it’s not possible to accurately measure things with a spectrophotometer. 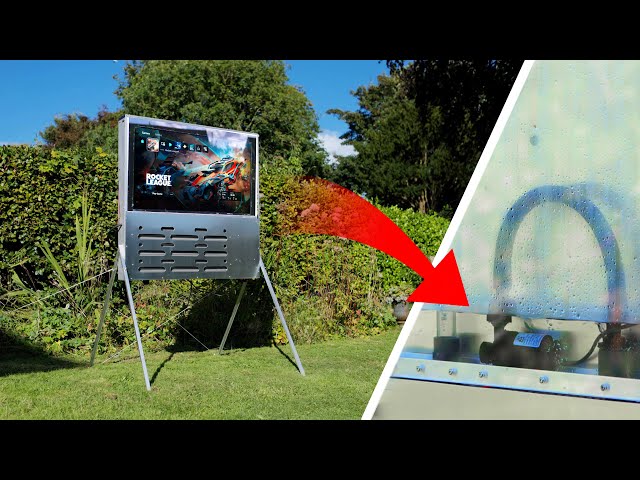 Unfortunately, it’s highly unlikely we’ll ever see a gaming monitor like this come to market, but if it did, it means we’d be longer confined to our gaming desks. That said, perhaps Valve’s anti-glare version of the Steam Deck will somewhat open the door to the possibility of a functional outside pc gaming experience. Or, you could always just use a tent and an extension lead to play your favourite FPS games al fresco.