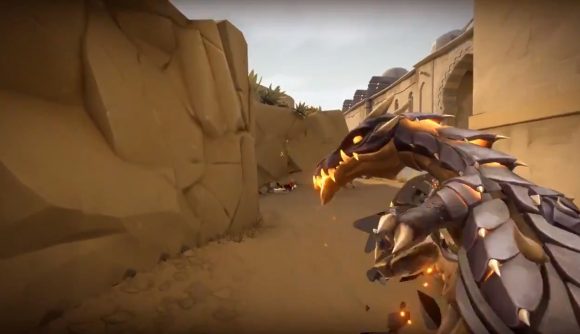 Riot has revealed the first set of Ultra Edition skins coming to Valorant, and it’s a scorcher – literally. The Elderflame skins transform weapons into fire-breathing dragons, and they’ll be available in the Valorant store July 10.

While the skins are strictly cosmetic, they look fearsome. Weapon models have been completely replaced with animated dragons, and they variously snarl, blast, and spew fire in their custom attack animations. In some cases, the dragons look back at you as you feed them a new magazine, and an ethereal serpent head descends from on high to finish off the final enemy of the round. You don’t need to be an expert in Valorant guns to recognize that these skins are extremely cool.

Dot Esports reckons that the skins shown off in the teaser trailer (which you can view below) cover the Frenzy, Judge, Vandal, Operator, and melee weapon. Others may be available in the pack as well, but those are the models shown in the trailer. Each has all new animations, and they all make it feel as though you’re kind of guiding a dragon into battle rather than hefting an inanimate object.

The skins are indeed cool, and they’re also expensive – which makes sense, as they’re the first ‘Ultra Edition’ set the game has made available. Valorant revenue lead Joe Lee says the full set (presumably of four) will run you 9,900 VP, or about $90 USD / £72, but it seems they’ll be available individually as well.

Before you buy, you might want to get more familiar with the in-game kit, so now’s a great time to learn all about Valorant spray patterns and weapon recoil.