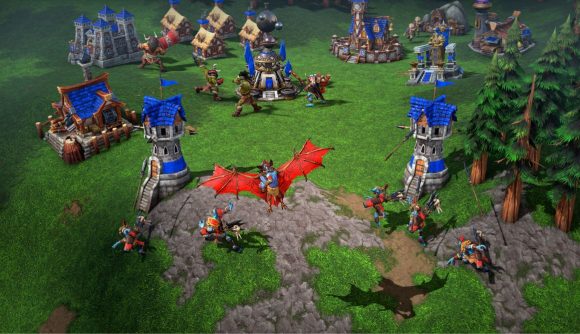 One of the most groundbreaking things about Warcraft III: Reign of Chaos was its openness to modding – the 2002 RTS formed the foundation for breakout genres that came afterwards. One of those was the MOBA, and the granddaddy of them all, Defense of the Ancients, will most likely work in Warcraft III: Reforged.

Long-time World of Warcraft fans will have plenty of lore to enjoy when they revisit Warcraft III, naturally. But Starcraft 2 production director Tim Morton, who is now working on the modernized version of Warcraft III, says his team has been thinking a lot about the custom map scene, too.

“There’s so many genres that came out of the custom maps for Warcraft III,” he tells us. “So, also updating the foundation for custom maps in Warcraft III [Reforged] will be another big vector by which people will come to the game.”

Defense of the Ancients – now more often known as Dota 2 – was originally a Warcraft III custom map created with Blizzard’s included map editor. Creating DotA also required a lot of under-the-hood development and new assets, but Morton says the goal is for mods to work in the same way in Warcraft III: Reforged. It just might take a bit of tinkering and elbow grease to get working correctly.

“We’re working to make sure custom maps have full support in Warcraft III Reforged, and just as in StarCraft Remastered, there’s a wide variety of stuff that people have done since the original editor came out,” Morton explained. “So we’ve got our work cut out for us, but definitely one of our goals is to support all the custom maps in Warcraft III.”

Since Blizzard is overhauling all the game’s original models, textures, and terrain to look good on modern 4K monitors, there are going to be areas where user-created assets for the original game aren’t going to mesh well with the updated version. Morton says modders will have to do some work to update those to bring them in line with Reforged’s updated visuals, but in general the plan is for mods to work the same way they did 15 years ago.

We learned earlier today that Warcraft III: Reforged will be compatible in multiplayer with the original version of Warcraft III, but it’s an open question as to whether you’ll be able to set up cross-play matches of Defense of the Ancients with mixed groups of players using both new and old versions. The possibility is exciting, though.

“As much as possible, we’d like to make it plug-and-play,” Morton said. “But there’s still some work for us to do there.”