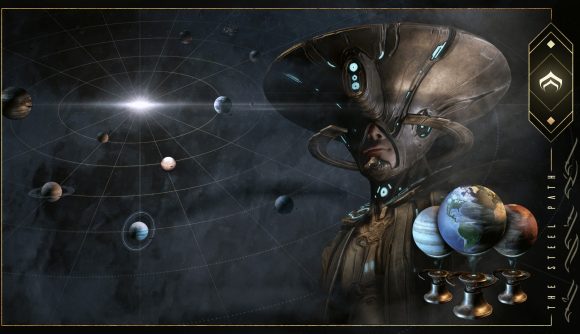 If you’ve already mastered the known galaxy in Warframe, something a little tougher is on the way. Developer Digital Extremes is developing a hard mode, of sorts, for the free PC game, and the second test is happening this weekend.

The Steel Path is a new slate of content designed specifically for Warframe players who have been around for a while and are in need of something that tests their skills a little more. It’s a “greater challenge”, live ops and community director Rebecca Ford described in the official forums, for those that want to take a second trip around the Origin System.

Another post gives some broad details on the Steel Path, breaking down what it is, and perhaps more importantly, what it isn’t. The idea is to give players of a certain ability an opportunity to really stretch their legs in some of the high level equipment they’ve accumulated, earning new cosmetics and rewards as they go. It’s not part of some “nebulous endgame”, the post states, nor is it going to be especially complicated. It’s new missions on familiar stages, no more, no less, and in order to get into it you have to unlock all the regular missions first.

A sign-up lottery is currently underway in the forums for a public testing cluster this weekend. If you meet the entry criteria, you can post there to be in with a chance.

The game’s annual conference, TennoCon, was delayed to August, in light of the current pandemic. New content is still coming however, as Digital Extremes rolled out The Deadlock Protocol update for Warframe earlier this month, adding Protea, a new warframe, among other features.