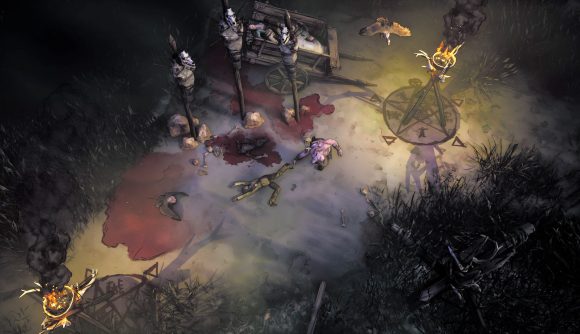 During this year’s PC Gaming Show, we got a new trailer for Weird West, the first game from Wolfeye Studios, the team created and led by veterans of Arkane Studios. After the trailer, Raphael Colantonio, founder and former president of Arkane, now head of Wolfeye, did a brief interview in which he explained the essence of the immersive sim is still alive in the weird, wild west.

“There’s not much difference in the spirit, you will really find yourself at home, it’s just it’s a different perspective,” Colantonio says on the similarity between Weird West and his work with Arkane. “Instead of seeing through the eyes of the character, you have the chance to run a party of people, so you have a strategy kind of view. But the exploration and everything is still the same spirit.”

Unlike first-person projects such as Dishonored 2 that make up Arkane’s catalog, Weird West is an ARPG, but the same open-ended approach to problem-solving is still as fertile as ever. Colantonio talks up the selection of ways players can clear objectives, specially given the supernatural elements. “There’s an objective, so for example, go inside this house and frame a character by putting a letter that he didn’t truly write that he did not write, so the sheriff can find it,” he says. “You could do it in a very stealthy way, which is what you’d imagine people would do, so probably use a power to put people to sleep, and then get inside.”

The structure of the game follows five main characters, once you complete the main quest for one you switch to the next, but the others are still in the world and can be recruited. The world is designed such that when one character dies, everything carries on. You can revive followers you recruit, but if you don’t, Colantonio teases something more ominous might happen. “Maybe they might come back someday in the form of an undead. You don’t know what’s going to happen.”


Weird West is set to come out sometime 2021, with a demo due in the near future. Be sure to have a look at our lists of best stealth games, best RPG games, best action-adventure games, and best open-world games to tide you over.