When Hi-Rez’s Todd Harris talks about Tribes Ascend, he does so in the past tense. His studio last month announced a six month hiatus on development for the game, and have since revealed an international deal with Chinese League of Legends money men Tencent for their increasingly successful third-person MOBA, Smite.

Beyond tentative plans for a free map editor, Hi-Rez are not likely to return to Tribes. We sought our Harris at Gamescom to find out precisely why.

“The potential worldwide [impact] with Smite was a factor in us announcing to the Tribes community that, ‘Hey, for the next six months our real focus is on Smite, guys’,” admitted Harris. “That was once piece of it. The business reality.”

Another piece was specific to Tribes – the fact that Hi-Rez were really struggling to think of anything else to add to their game of exquisite jetpack jumping.

“We don’t feel the game needs more guns,” Harris explained. “It has more guns than any other Tribes game, it has more than enough for an FPS. Really the community would like more maps.

“We do have maps under slow development now, and we’ve said we would like to explore and deliver a map editor to the community. And that really is probably the next best step based on the current state of the game – which is pretty darn complete and pretty awesome value for your dollar in my book – if you even choose to spend a dollar.”

That’s one aspect of Tribes that Harris seems almost wistful about. In making Ascend a free-to-play game, Hi-Rez signed it up to a range of unwritten expectations set by TF2 and League of Legends. The furore around their decision to halt work on it suggests fans think Hi-Rez have broken that implicit contract.

“It was free-to-play, and then at the tail end really by the end of the year we said, ‘Hey, you know you can get it all for one price’,” said Harris.

“If [Tribes began as] a $30 game, if people got what they got at release and in ten months we doubled the content – we added twice as many maps, we added close to fifty extra items – then I think people would have had a different expectation.” 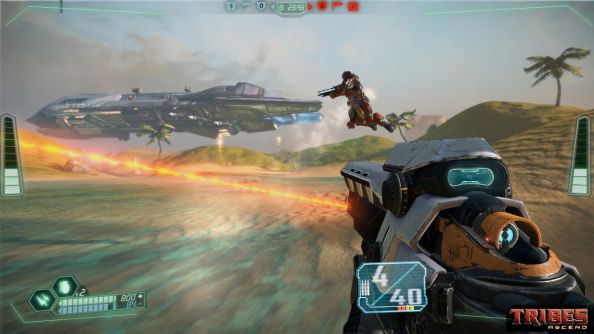 We wondered out loud if Hi-Rez were inviting criticism by actively announced that they had no plans to develop more Tribes.

“We try to be pretty transparent with the community, and sometimes that is a positive, well-advised PR strategy and sometimes it’s not,” agreed Harris. “And the Tribes community is very vocal, as you know. They have a lot of history with the franchise, they have a lot of passion around the franchise, they want more Tribes – some of them don’t want anything else. So I think they’re advocating for more Tribes.”

Ultimately, though, that ‘business reality’ Harris referenced put paid to any plans Hi-Rez might have had to continue the series.

“Tribes as a project was profitable. But for the most part we invested the profits back into Tribes, so it wasn’t something that would really allow us to develop future titles with the profits and grow our studio and grow a second Tribes title,” he said. “But it was successful in that most games don’t ship. Most games that do ship, 80% of them are not going to make money.

“So the fact that it made money, [and that] we think it was part of establishing a new wave of free-to-play games – not the only one, but part of a nice wave that really satisfy a traditional hardcore PC gamer in a balanced way with high production values for free – we think that advanced the industry forward. And from most gamers’ perspective, I think that 90% of people who played Tribes decided they got more than their money’s worth, if they decided to spend a dollar.

“I will say for the dedicated Tribes’ fans, we understand that they have a long history with the franchise and would maybe like to see it go a different way,” Harris added. “But we were very proud with what we did with it and feel good about it. We’re glad we bought the franchise, we’re glad we made it free-to-play. We feel great about the release and we feel great about the content we’ve done since release.”