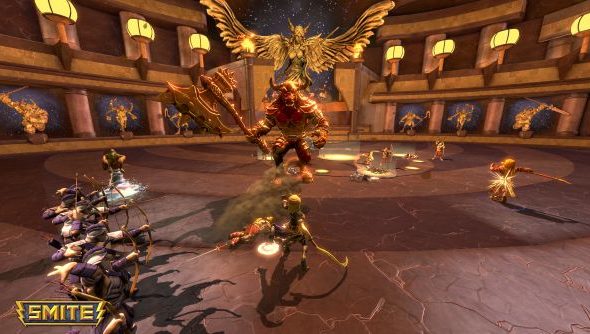 When chatting to Heroes of Newerth owner Mark DeForest about League of Legends a couple of weeks back, he told us not to “underestimate the power of the backing” of Tencent – the Chinese investment company that threw its weight behind the now Staples Center-conquering MOBA in the early days.

So that’s what we’re doing now. Tencent have agreed to publish Tribes Ascend developers Hi-Rez’s MOBA, Smite, outside of Europe and North America. And we’re giving that news due attention.

“Smite is a totally new type of MOBA with some traditional mechanics, but also providing different modes of battle and gameplay,” said Tencent vice president Steven Ma in a statement. Those differences, he says, will see Smite stand out in the swelling Chinese PC market.

For Hi-Rez’s part, CEO Todd Harris reckons that Smite’s selling point is its third-person perspective, which provides a rare “action element for a MOBA”.

“We believe the MOBA category will be a genre that can support multiple games,” he said. “We want to grow the market by adding an action element.”

The statistics start to get a bit… specialist halfway through, but it’s astonishing to see Tencent lay a claim to 79.3% of the world’s MOBA players. They also estimate that the MOBA market has grown some 70 percent in China in the last year.

Hi-Rez will publish the game themselves in North America and Europe, Harris told VentureBeat. Tencent’s responsibility is merely the rest of the known world. Intriguingly, Hi-Rez are working to expand their culturally-varied pantheon of (made up) gods in the hopes of connecting with a broader international audience. That’s the thinking behind the slew of recently-revamped heroes.

“We have been working closely with Tencent to ensure that Chinese gods are authentic to that culture while still making those gods available to all Smite players worldwide,” said Harris.

Hi-Rez’s closed beta with Tencent will get started in October. Beta testing on Smite began over a year ago in June 2012, and an unsniffable two million players have signed up since. I’m told it was the thirteenth most-viewed game in the West on Twitch last month. That’s the same month Hi-Rez spent fielding breach of privacy allegations.

Are you one of Smite’s two million? Or do you prefer to order your heroes about from a safe distance?