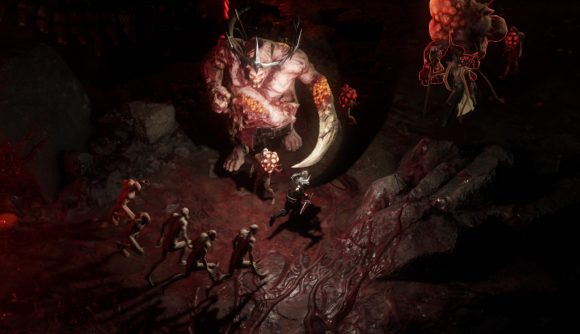 Now that part two of its Bloodstorm update has been released, CryEngine-powered RPG game Wolcen: Lords of Mayhem is ready for another round of improvements. Wolcen Studio says it has plans for three more major content updates this year, which will include reworks to several key game systems, new items and cosmetics, new monsters, and new environments.

Next up is Content Patch 3, which should be arriving in early or mid July, the developers say. This patch is going to include a revamp to Summons, new environments, new damage type variations for skills, new cosmetic armour, and various unenumerated quality of life improvements.

The devs include some additional details on the revamp to Summons they’ve been working on. The rework is “massive,” they say, and includes “entirely redone” models, animations, and VFX. You should see improved behaviour and control, and you’ll be able to see Summons’ damage in tooltips and on screen as they’re dishing it out. They’ll also power scale along with your character, your equipment, and Gate of Fates nodes.

Sometime in the September-October timeframe we’ll see Content Patch 4. That will include new endgame activities and an accompanying rewards system. There will be more new environments and monsters, more variations for skills damage types, and another round of new cosmetic armour.

We are talking about our timeline, future content patches, and an ETA for Controller Support.

Feel free to send us your feedback and suggestions on our official Discord:
►https://t.co/Zvuqm7oTGE pic.twitter.com/aFl9l3LMd9

Then in November or December, Wolcen Studio says it plans to roll out Content Patch 5. That should add more new environments and monsters, but will also introduce controller support, if all goes according to plan. “We have a dedicated team working on controller support and are making sure the feature is ergonomic and player-friendly,” the devs write. “We’re aiming for a release in November/December, although, as previously stated, this might be subject to changes based on how well we progress on its development.”

Efforts to squish bugs and make quality of life improvements suggested by the community remain underway, the studio says. You can look forward to additional details in the next Wolcen monthly update.