With a sense-of-adventure aesthetic and a concentration on a physics-based, fully-persistent world, Bossa Studios seems to be attempting to carve a new niche within the bloated MMO genre with Worlds Adrift. Forget levelling up, hub cities full of hawkers offering digital currency for hard cash and grinding through enemies, the goals being aimed for here can’t be achieved by simply mimicking what has come before.

In fact, many of Worlds Adrift’s most vital components seem to have been taken from the realm of modern survival games more than they have from traditional MMOs. For starters, new players begin their life on one of many floating islands – isolated from others and expected to immediately set about understanding and impacting the world for themselves.

Check out the latest Worlds Adrift gameplay trailer for some idea of how that world works.

The goal for Bossa is to achieve a user density that results in an individual coming across another player once every half an hour. As with the likes of DayZ these moments are likely to be tense as players are free to attack whenever and without warning, so any uninvited guest should be treated with caution until they prove themselves friendly. Rather than kill for the sake of killing, however, aggressive peers are sure to be ultimately looking for a way to acquire for themselves any resources and transportation you’ve managed to scramble together.

Said resources can be used to construct Worlds Adrift’s single most important asset: a floating ship. Your ship is your bridge to other islands near and far and, with the game world expanding on a regular basis (through the addition of extra islands) in order to retain the correct player density as user numbers increase, is something that is worth spending time over to get right.

Construction can be started once you’ve gathered enough materials, each element of the ship generated individually so that you can mix and match items to create your own designs. You might decide to go light and nimble, doing away with armour plating and loading up on extra engines. Or you might aim for the floating fortress look, with cannons neatly flanking each deck. Defining where items should be placed is a simple case of dragging and clicking them with the mouse, the component turning blue to indicate a suitable position. 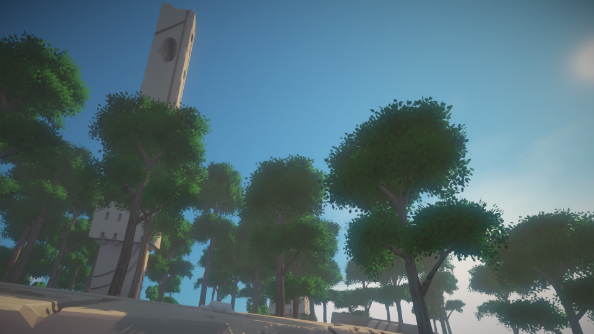 You’d do well to take into account Bossa’s love of physics-based game mechanics, however – a passion that has seen the London studio deliver both Surgeon Simulator and I Am Bread. Should your ship construction turn sloppy and you find that parts are falling off during the building phase, the physics system is liable to steal them from your grasp forever.

If a part lands on a slope then it will inevitably fall down that slope. Seeing as this is a game set across a series of floating islands, that fall could eventually be into the abyss below from which you’ll never get it back. Gathered resources lost.

Where you begin ship construction, then, is an important decision to get right. Finding a flat piece of land would make your life easier, but from what I’ve seen such places exist only in the more open and exposed portions of islands. As such, you’re an easier target here for poachers and killers. Finding a happy balance between flat and safe land should be a number one priority. To assist in this you have a grappling hook to help you navigate to any part of your island, removing any potential frustrations when it comes to jumping/clambering over terrain. 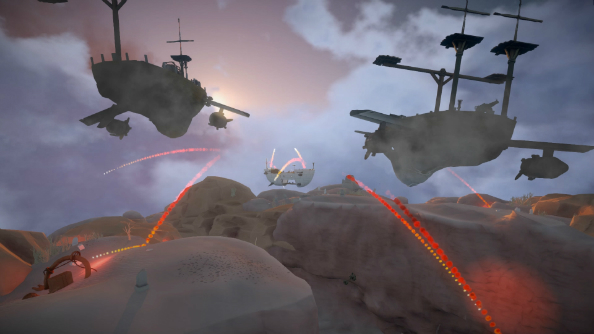 You’ll have different resources available to you depending on what kind of island you’re on. For instance, a lush green and densely forested island is going to see you enjoy greater access to wood than its nearby sandy, desert cousin. Supposedly, the game will not place new players on an island without resources – although, that doesn’t mean you’ll enjoy all the building materials you could ever hope for. While Bossa wants players to be given a fair chance from the off, this is still a survival game and combing through the world for useful ‘stuff’ is core to that.

Set across a single server, Worlds Adrift is fully persistent and, therefore, it’s possible that the game world you know will have changed wildly when you next log back in. Any impact that you make through the cutting of trees or the littering of construction debris remains in the world until it’s interacted with further.

Do not be alarmed, though, despite that persistence your ship cannot be stolen or dismantled for parts so long as you make good use of all of your options. When you log out your ship will also be removed from the world, so long as you’ve added a spawn point to it. These spawn points can only be used by the person that deployed it, meaning players can’t share/hijack the spawn points of others. If you don’t add a spawn point to your ship then it won’t leave the game when you do and will simply sit there until you return or, more likely, until someone takes the chance to steal a ready-made, unguarded vessel. 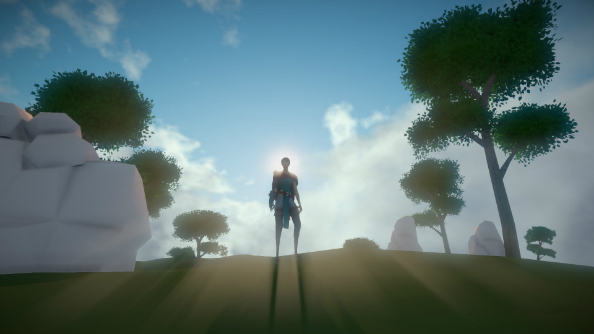 Ships, then, are not assigned permanent ownership. If it’s in the world then it can be stolen. Therefore, you’ve got greater chanceof both building a better ship and keeping it safe if you team up with others. Multiple users can share the same ship by having each of them place their spawn point on its deck(s). In this way you can pool your resources to create something enormous, embark on raids against others using the power of multiple manned cannons and you reap the rewards of designing your ship by committee… which may not be a benefit depending on your personality.

It’s easy to envisage your ship as a mobile base of operations. A do-it-yourself version of a guild hall that evolves and morphs over time to meet the demands and desires of a crew that is constantly on the move and on the hunt for new sights and stories.

Bossa has set the ambition bar higher than it ever has before with Worlds Adrift, with everything from the single-server architecture to the persistent physics offering as much in terms of technical challenges as they do in potential gameplay rewards. Whatever the case, though, it’s nice to see a studio passionate about evolving a genre that has at times been found guilty of resting on its laurels and sticking to safe, recognised design tropes.