Update 21 Jan, 2016: The Sectopod and Gatekeeper have made their official debut on to the XCOM 2 roster.

The Sectopod and Gatekeeper are two of XCOM 2’s deadliest looking enemies and, frankly, we hope they’re near the top of the alien tech tree or we’re probably very doomed. Following on from the Sectopod leaks earlier this month, and the Gatekeeper popping up on IGN, both have now been officially revealed on the game’s site.

XCOM 2 is probably our most anticipated upcoming PC gamebut there are plenty more.

The Sectopod post reconfirms that it has a crouching and walking mode, and in the latter it can stride through everything from your soldiers to large buildings. Sadly Millenium’s videos from earlier in the month have been taken down, but rest assured that it did have more HP than you can shake a large plasma stick at. It really towers over everything and if you don’t manage a quick hack, ambush or to isolate it, I’m really not sure how the hell you’re meant to deal.

Meanwhile the Gatekeeper is still the hellish Cyberdisc 2.0 we reported on a couple of weeks back. Most notably from the official post is that the zombies it creates, unlike those made by the Sectoid, don’t die when you deal with the Gatekeeper. They’ll keep absorbing your ammo – and health, if they get close – until you can put them down. Oh dear. 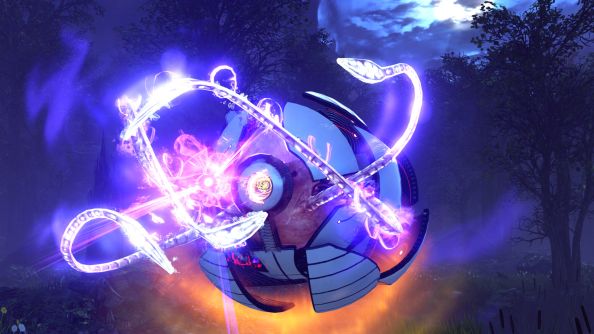 Jeremy will have a full review of the game for you before release. If our XCOM 2 preview and everything we know are anything to go by, it’s probably going to bequite good. The loading screens certainly will be.

Original Story 11 Jan, 2016:XCOM 2’s so close you can feel it starting to pull at your bones with its abductor beam and reconfigure you into a superior lifeform. Jeremy was more than pleased with what he played in hispreview, but the build that he and many others got access to was almost complete. Therefore there’s all sorts of details on enemies and equipment from later in the tech tree leaking out. Some might consider them spoilers, while others will just like to be prepared for what they’ll face. You’ve been warned, commander.

Of all places, this particular set of videos are coming out of the e-sports team/French gaming news site Millenium and theirDailymotion channel. However, the trappings of odd video sites don’t make the thing itself any less terrifying:

Oh good, you gave them really long legs and a massive laser cannon. That’s definitely better than missiles. Why, Jake Solomon? What did we ever do to you?

So maybe it isn’t all bad, you think, maybe they’re fairly friendly, or easy to kill, or the range of their laser isn’t all that long, or it doesn’t dothat much damage. Millenium return to show that that’s all wishful thinking.

A quick count would estimate those little blocks at about 30 to 40 HP, five armour, and all those lovely, deadly abilities. Hey, the laser takes a turn to fire, great, that’ll really make up for it basically one-shotting anyone stupid enough to stand in the way. As we discovered with the Gatekeeper, bad guy designs in XCOM 2 have certainly had the ante up’d, especially in the lategame where the first reboot had problems threatening your omni-powerful squads of psi-operatives and flying snipers.

The second game will be continuing the trend of letting you name soldiers after various individuals to unlock in-game caricatures of them, complete with unique stats or special equipment. The most famous of these was Sid Meier, and he’s returning here as a jacked-up Psi Ops combatant:

Some powerful stuff at his, and your, command. I’m hoping that there’s still going to be some surprises left by the time the game proper rolls out on February 5th. There is a limit on how far you can go in the preview, up to two months of in-game time, and we’re yet to see a few XCOM mainstays like Ethereals pop out, but it does feel like a lot of robo-cats have escaped the laser-bag. The sense of discovery is important and Firaxis may have let it slip early.