The new Predator screen is packing in a whole lot of lovely screen technologies to bring a seriously curved ultrawide down into a more affordable price point. The excellent Acer XR341CK and Asus ROG Swift PG348Q are gorgeous monitors, but their $1,000+ cost make them prohibitive for most gamers.

Read more: check out our guide to the top gaming monitors of today.

We’re still talking about a fair sum of cash for the $700 (£700) Acer Predator Z301C, but if you’re chasing a high-performance curved screen with the gaming-centric 21:9 aspect ratio then you’re always going to be paying a premium over the 16:9 competition. That said though, the TN-sporting Zowie XL2735 is almost the same price with its weak-heart panel and smaller 27-inch screen.

Information overload? Just want the facts, ma’am? Then hit up the quick links below to jump to the performance and verdict sections. 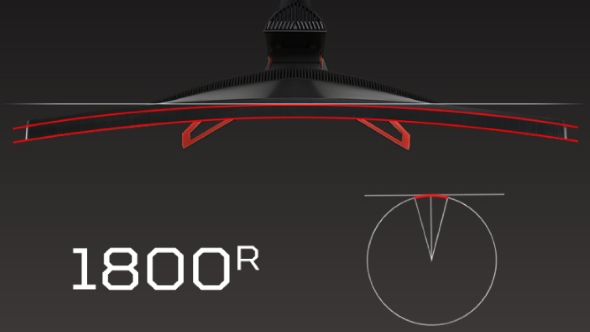 The first thing to note for the new Predator ultrawide is its native resolution. Across its 30-inch span it comes rocking a 21:9 resolution of 2560 x 1080. Compared with the 34-inch Acer and Asus panels, with their 3440 x 1440 resolutions, the Z301C’s screen is a fair bit tighter, especially along the vertical axis.

It’s also an AU Optronics VA panel, as opposed to the IPS technology used in those larger ultrawides. What that does mean is that the colours aren’t going to be quite so vibrant as an IPS panel, but they’re not going to be far off. What the VA panels are particularly good at though is the black reproduction and offer an experience which is far clearer, crisper and more punchy than anything a weak TN screen can deliver.

There are two spots where the new Acer Predator Z301C has the edge over some of the more expensive ultrawides I’ve tested…depending on your point of view. Firstly the default 144Hz display can be overclocked, via the magic of Acer’s excellent controls and menu system, to a heady 200Hz. Where the Asus Swift is feeling pretty good about being able to hit 100Hz, the Acer blazes past it at speed.

The more contentious feature though is the curve of the Z301C’s screen. At 1800R it’s far tighter than the standard, relatively shallow, 3800R curves of most of the 21:9 screens on the market today. Only Samsung are looking to go further, offering a 1500R bend to their inaugural Quantum Dot ultrawide. That curvier sweep to the display brings the edges of the panel closer in to your peripheral vision, arguably making such screens as this 30-inch ultrawide more immersive in-game. The difficulty is that we also use our monitors for other things and such extreme curves can make them less versatile for more generalised PC use. 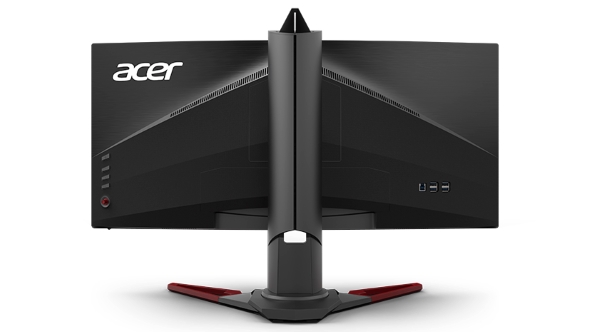 The image quality of the Z301C’s VA screen is impressive, with bright colours and excellent contrast levels. Thanks to that VA tech the viewing angles are good, with only a very slight discolouration at the very edges of the wide, 30-inch panel.

The white saturation of the screen is outstanding, with even the very closest of shades clearly separated from the others. Unfortunately I was expecting more from the black levels of the standard screen mode, especially given how good VA panels typically are with shades of grey. It’s definitely not bad, but the way the screen has been set up means there seems to be little difference between the various shades which leads to it lacking a little detail in dark scenes, with textures blending together.

I also noticed a small amount of ghosting with the screen when gaming in FIFA 17 in the screen’s standard settings. Making the switch from 144Hz to the overclocked 200Hz refresh rate did help minimise the effects. I did also try the specific sport setting, but that just seemed to emphasise the ghosting effects. And don’t get me started on the super-grainy Racing mode…

Despite the excellent controls, utilising a little nubbin joystick to let you navigate the clear on-screen display, I found little need to step outside the standard monitor mode. It was the only option that seemed to deliver good image quality without odd little effects being added.

The biggest problem for the Z301C though is not really the panel performance itself, but its native resolution. I love 21:9 monitors, especially for gaming, but I don’t exclusively use my PC to play games on. I write, I watch TV and I read stuff too. None of that really works when you’re limited to the Z301C’s 1080 pixel height.

The difference between an ultrawide running with a desktop at 1440 pixels high and one running at just 1080 pixels is huge. It makes it feel like you peering through a letterbox at your desktop on the other side. The benefits of that extra 21:9 width are negated by the limits of its height. In-game it’s not so much of an issue – there the extra width pays dividends – but still the physical height of the monitor makes it seem oddly slight despite its 30-inch span.

The lack of height also affects how much difference that extra tight curve has on your gaming immersion too. The whole point of bringing the extreme edges of an ultrawide panel in towards your head is to help it wrap around your peripheral vision, delivering a more all-encompassing gaming vista. When the panel fills less of the vertical space it immediately has less of an impact. 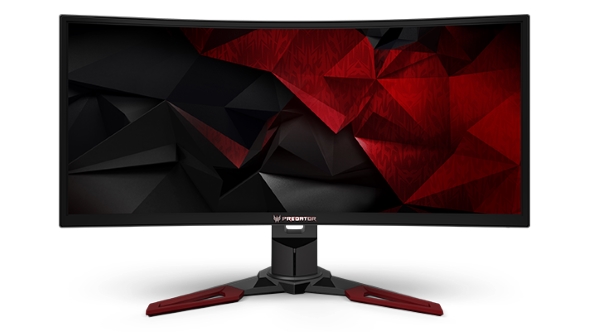 I’ve got to applaud Acer for bringing out an curved ultrawide with a super-high refresh rate and a price tag that isn’t going to have your bank account hyperventilating. Despite myself I also rather liked the more extreme curve to the Z301C’s panel. With a standard 3800R curve it’s so shallow I struggle to see the relevance of bending a panel so slightly – with the Acer’s 1800R curve you certainly know about it, even if it does make web pages look a little odd and the lack of vertical height spoils much of its potential added immersion.

But the compromises made to bring the Z301C down to a more affordable level makes it a tough one to recommend. At $700 (£700) it’s still a lot of cash to drop on a gaming screen and the limited, letterboxed 2560 x 1080 resolution in the end makes it a bit of a disappointment.

The panel itself is pretty impressive, slight ghosting issues aside, and the 200Hz refresh rate makes everything gloriously smooth otherwise. But those resolution issues would always make me regret spending the money on this than on a more effective 3440 x 1440 monitor. And Acer make some of the best so you don’t have to look far…