Real-time strategy games have never really gone away, but the past decade has seen their glory much diminished from the heady days of StarCraft’s peak. Age of Empires IV arrives like a long-lost claimant to the RTS throne – one whose titles have since been absorbed into neighbouring kingdoms. Whether there’s room left for a demanding, macro-driven series like Age in the modern landscape is very much an open question, but one thing is clear: this is Age of Empires almost exactly as you remember, and some more besides.

Given the backlash Relic faced a few years ago over its experiments with Dawn of War 3, it’s perhaps not surprising that this time out, the studio has hewed much closer to the established order. Age of Empires IV feels almost shockingly like Age of Empires II. Each bark from a selected worker and thud of a battering ram against castle masonry feels just how I remember in Age II, albeit filtered through more than two decades of nostalgia.

For readers new to the series – and there should be quite a few of you given it’s been 16 years since the last numbered entry – Age of Empires is a historical real-time strategy series about building and defending a settlement. In a standard game, you’ll extract resources and invest them in structures and soldiers, which you’ll then use to knock down whatever your opponent is building. There are other paths to victory as well: you can win by controlling all of a map’s sacred sites for a set amount of time, or by building and defending a wonder.

Age of Empires IV includes eight civilisations, and they’re a mix of old and new. The English, French, Chinese, and Mongol civilisations return from past games – with slight alterations – while the Delhi Sultanate, Abbasid Dynasty, Holy Roman Empire, and Rus are all new. While every civilisation shares basic units, structures, and technology, each has unique mechanics and units to master. 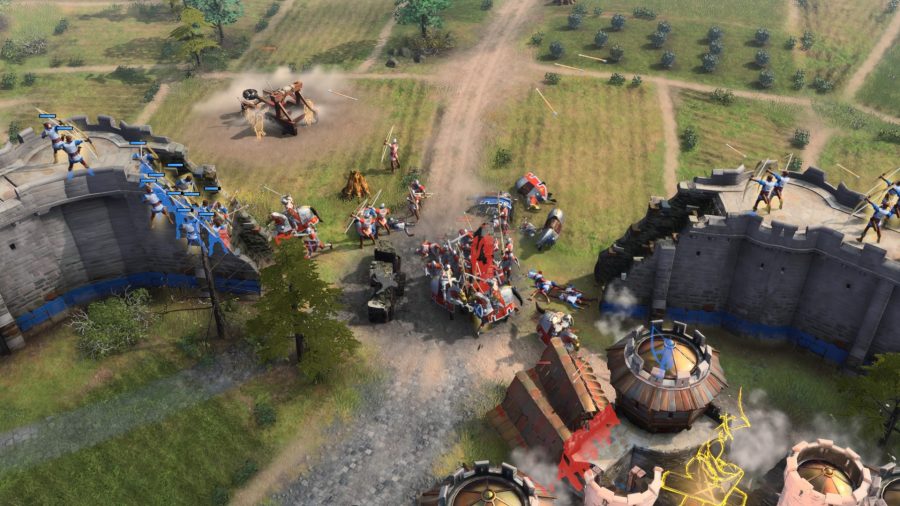 The key to success is learning where to direct your attention at any given moment. Starting with a town centre and a couple of villagers in the Dark Age, you’ll have to forage for food and building materials while you scout the map. I love this initial phase: my fledgling town feels fragile and exposed, and every action I take is significant. Where I decide to build my first mill will determine the shape of the castle walls I’ll (hopefully) be constructing later on. When I’ve saved enough food and wood, I can build one of two culture-specific landmarks that advance my civilisation to the next age, unlocking new technologies and military units.

Its painterly visuals are pleasant enough, but textures and animations can look quite dated in places

Once the second age dawns, things get busy fast. There are always multiple tasks that need my attention at any given moment, whether it’s raiders harrying my traders, palisade walls in need of repair, building new houses for my booming population, or balancing military recruitment so I’ve got the right mix of ranged, melee, cavalry, and siege units to attack the enemy’s settlement. When everything’s running as planned, Age of Empires IV feels bustling and alive: archers are rushing to take positions along my walls, lancers and light cavalry take their places in formation, and men-at-arms hurry to build battering rams that will crack open my opponent’s battlements and let my army flood in to burn their town to cinders.

Four civilisations get a single-player campaign. These can be played in any order, and serve to teach the game’s wider mechanics as well as the unique traits of these four civs. England’s campaign, which begins in 1066 with the Battle of Hastings, hits the high points of the Norman conquest while introducing the basics of siege combat. The French campaign is set in the Hundred Years War, and flips things around to focus on defence and building your economy. 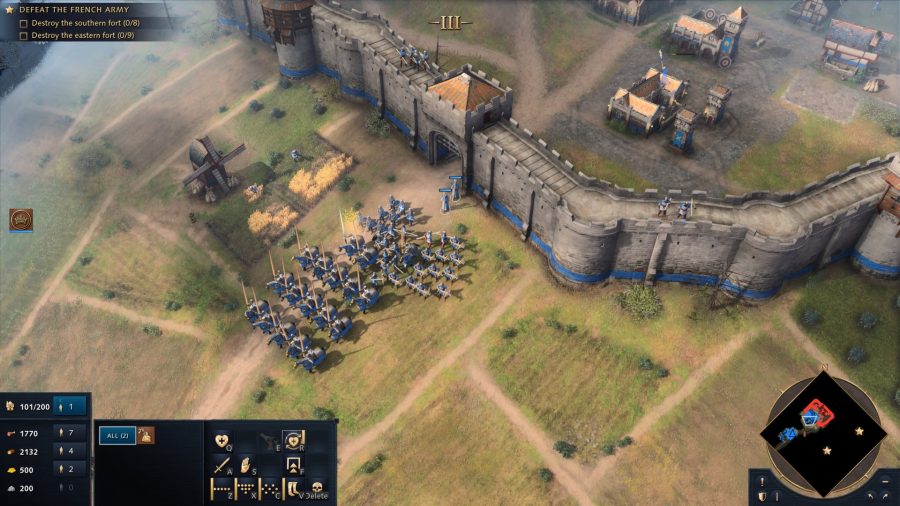 The Mongol and Rus campaigns feel much fresher by comparison. Starting out as the Mongol general Subutai, I have access to a formation of fearsome Mangudai horse archers. These warriors can fire while on the move, making them perfect for vanguard actions. It also allows them to mercilessly abuse the game’s default unit behaviour, which is to attack anything within a certain range unless explicitly ordered to stand ground. My Mangudai could approach a formation of spearmen – normally a hard counter to mounted troops – and bait them into pursuing. After a short distance, they’d fall back to their original positions, but the Mangudai could continue to rain arrows on them from just out of reach.

This can make managing large formations in the heat of battle frustrating: unless ordered to stand ground, costly cavalry will charge headlong into onrushing ranks of cheap spearmen. While the AI’s strategic decision making is often impressive, units themselves are a bit dim and require a lot of babysitting.

Missions are generally fun remixes of standard game mechanics with an added thematic goal or challenge. Playing as Prince Dmitriy of Moscow, I gather volunteers from villages along the river Don, where I’ll make a last-ditch stand against the Golden Horde, who intend to punish my failure to render tribute. The battle takes place in the waning light of the evening, and the reddening sun glitters across the rippling surface of the river and in the fall foliage on the trees. Allied villagers build fortifications at a fallback position on a hilltop while I wait alongside my army, which I’ve positioned across three shallow points in the river to await the Mongol forces. 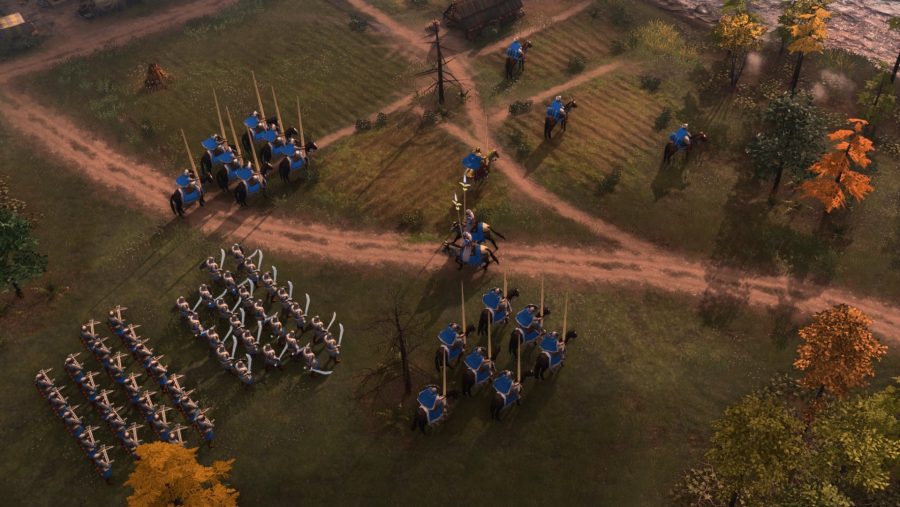 They arrive in waves, first bringing spearmen and archers before escalating to deadly cavalry raids and eventually siege engines. We fall back to the hill, and some scripted cavalry reinforcements of our own help us hold our ground before we finally retreat to the north bank of the Don for the last two waves.

It’s a fun, edge-of-your-seat battle, but it’s also representative of one element that Age of Empires always struggles with: its attempts to tie its brand of RTS gameplay to specific historical events. While scenarios will frequently attempt to recreate real-life battles, they usually feel more like Renaissance fair reenactments – a couple dozen costumed fighters per side, rather than the thousands of levy fighters and professional soldiers who were present in the real event. You’ll advance through ages every few minutes, which feels absurdly fast, and your peasants will build a cathedral in about the same amount of time it takes a trade caravan to make the trip to an outlying village. It’s all a bit goofy, and you’ll see what I mean right away in the downright dainty rendition of the Battle of Hastings that kicks off the Norman campaign. 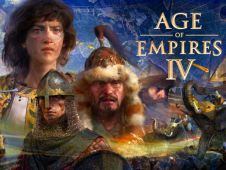 Age of Empires IV acknowledges this with an impressively well-produced series of documentary videos, which unlock with new missions as you play the campaigns. You’ll see experts discussing the various types of crossbows used in feudal England, and demonstrations of Mongolian war drums out on the steppes. Introductions to missions feature present-day footage of historic battle sites and castles, overlaid with line animations of military formations and fortifications. It’s all very well done, and adds valuable context for the abstracted action you find throughout Age of Empire IV’s 35 single-player campaign missions. 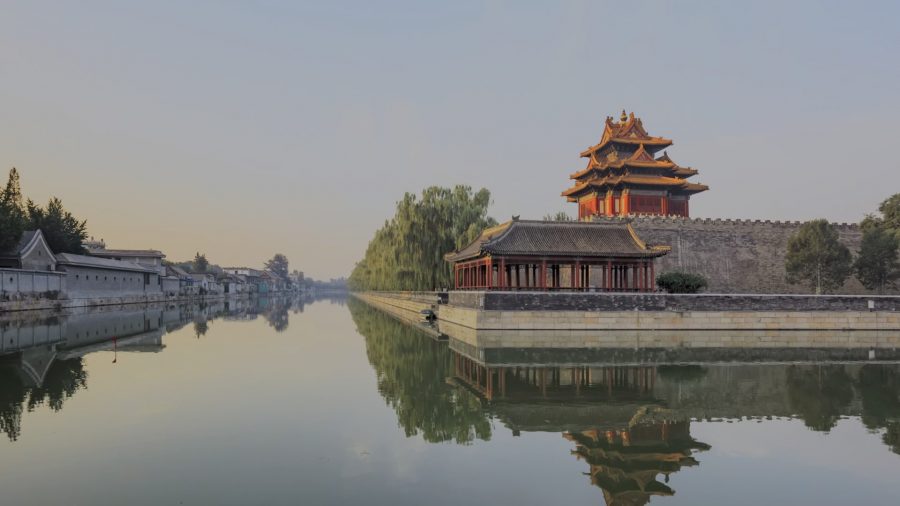 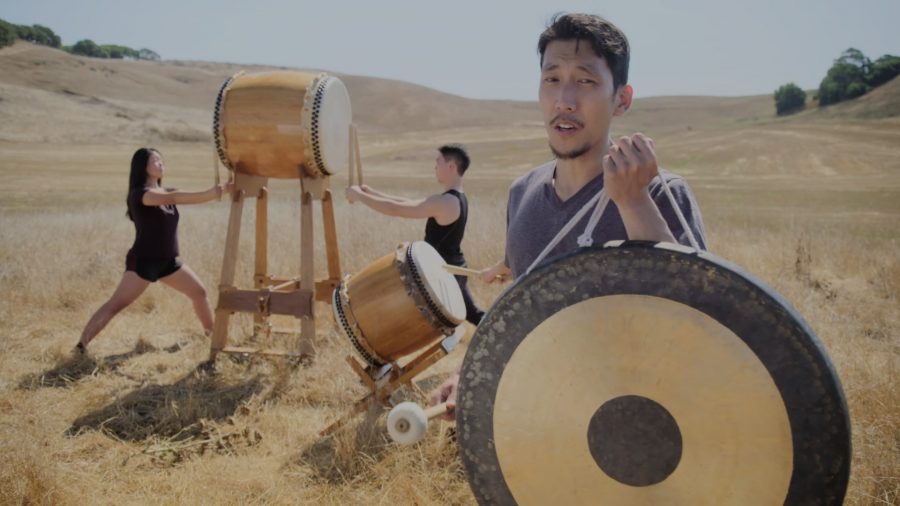 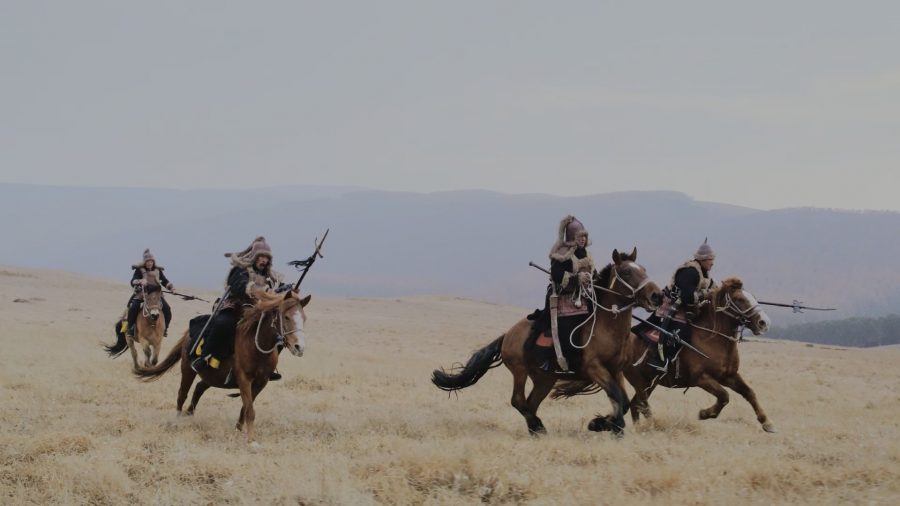 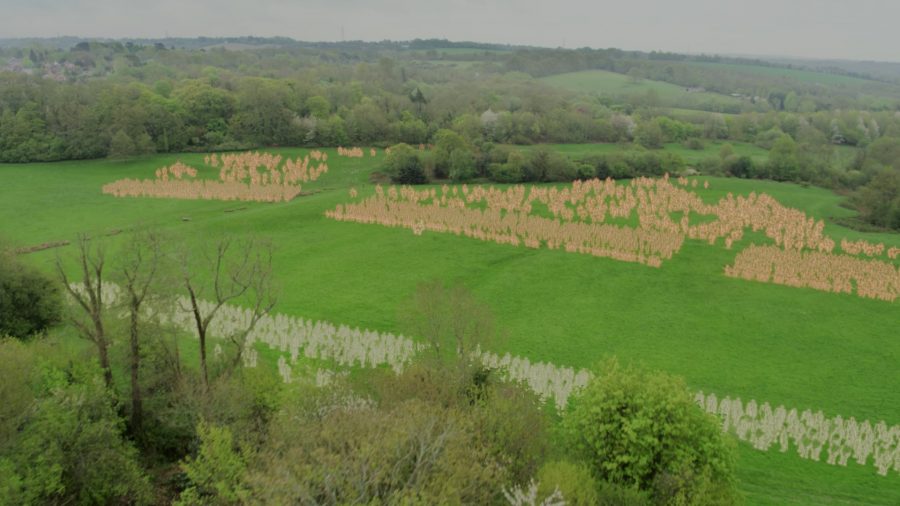 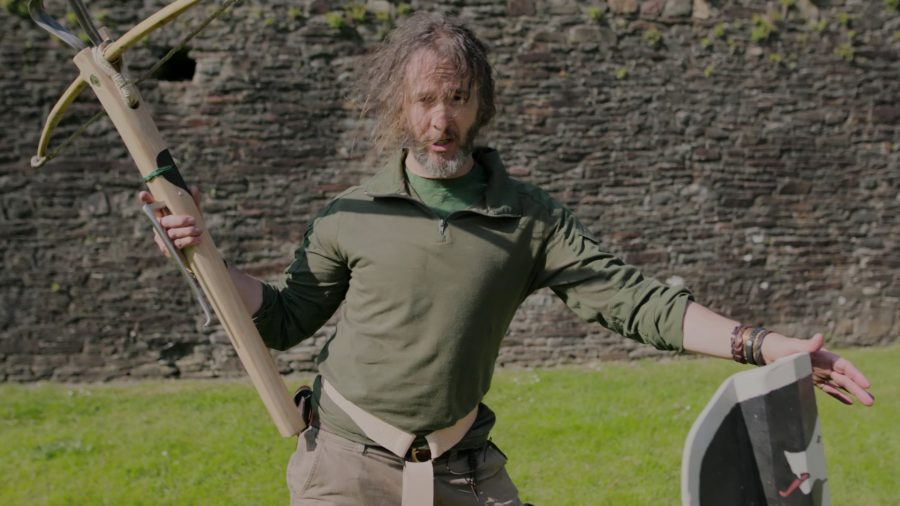 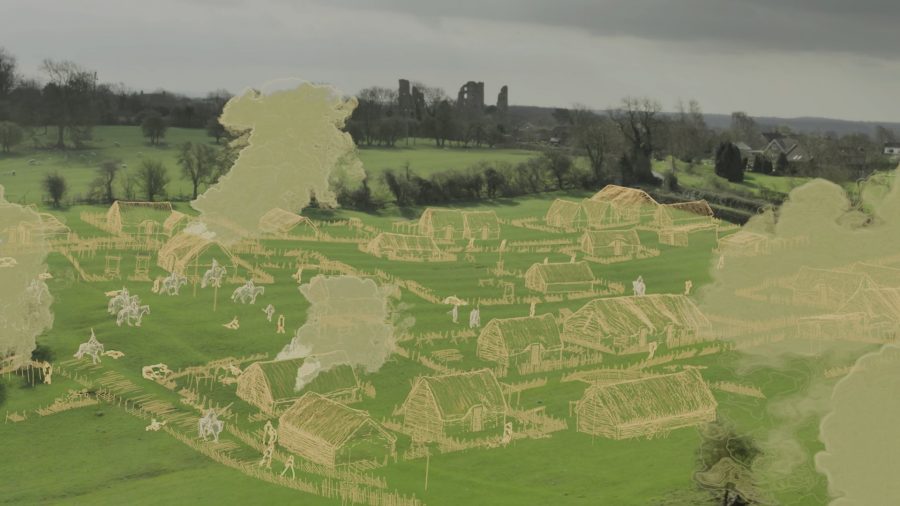 While those missions illustrate how tech trees and unit types work, they tend to teach lessons that don’t apply as well to the long-term version of the game, which is multiplayer. Fortunately, Age of Empires IV includes the Art of War mode that has been so welcome in the Definitive Editions of its predecessors. This is a series of timed challenges that provide hands-on lessons in RTS fundamentals as applied to Age IV, like how to build your economy, conduct sieges, and manage units and counters.

There’s plenty to dig into on the multiplayer and skirmish mode front, as it happens. In addition to the campaign and Art of War, there are also several single-player scenarios and custom skirmish matches you can play against the AI. You can set up custom bot matches too, picking the victory conditions you want or opting for a more open-ended sandbox game. At launch, Age IV includes 17 themes for procedurally generated maps, and you can set these to scale from tiny two-player battles to massive spaces with room for up to eight players.

These can all be used in multiplayer as well, which also lets you set up games as co-op matches versus AI opponents, team-based battles, or eight-player free-for-all brawls. While they weren’t usable during the review period, a spectator mode, ranked play, and hand-crafted maps will be available at launch as well. 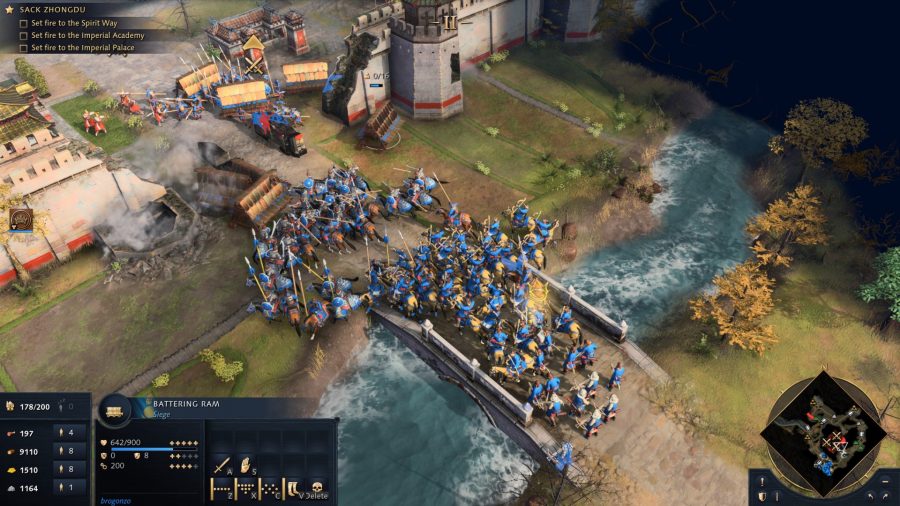 Age of Empires IV stumbles in a few areas. Its painterly visuals are pleasant enough, but textures and animations can look quite dated in places – siege equipment turns awkwardly and stone structures crumble in big, low-poly chunks. The AI’s unit micromanagement can be atrocious at times and, as noted above, is vulnerable to exploitation. However, it can also be devilishly clever, sending scouts out early in matches to steal sheep from behind your settlement, or massing siege towers and rams in a secluded area of the forest so you won’t spot them until it’s too late to react.

The enduring popularity of the Age of Empires series proves there’s a ready audience for Age of Empires IV, and this new entry doesn’t add anything disruptive to the mix. That means it also does little to smooth over the manic economic play that’s gone somewhat out of vogue in the past 20 years. Fortunately, World’s Edge and Relic have wisely included a healthy suite of tools to help acclimate new players to the demands of classic RTS games: the campaign includes an accessible ‘story’ difficulty that removes most of the pressure, and the Art of War lessons are hugely helpful for new players who want to understand the nuts and bolts of successful economy management.

Ultimately, Age of Empires IV’s value to you depends on what you expect from a historical strategy game in 2021. Even with the informative video segments adding colour and context, battles in Age of Empires IV aren’t convincing historical recreations at all – particularly not after the spectacle we’ve seen in more than a dozen Total War games that have launched since Age of Empires II came out. If, on the other hand, you’re ready to relive the sweaty glory days of climbing the StarCraft II ladder, Age of Empires IV is ready to make its move for the throne.

Polishing a classic formula without revolutionising it, this is a robust package that includes something for just about every kind of RTS player, from beginners to grizzled veterans.