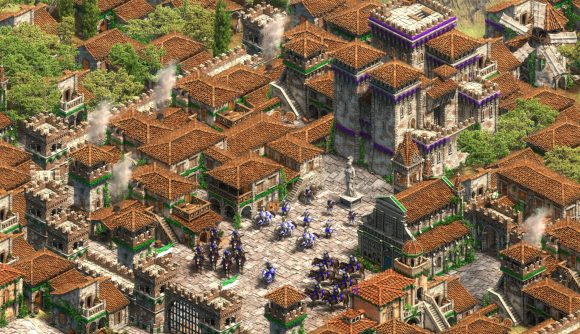 Let the people rejoice, for co-op has arrived in the sainted lands of Age of Empires II: Definitive Edition. The updated version of the classic RTS game will now allow you and a friend to fight side by side through several historical battles, earning glory, honour, and high scores.

Co-op initially arrived in Age of Empires II: Definitive Edition in the public update preview branch last month, and Forgotten Empires has been gathering feedback and making tweaks since then. Now the feature is available in the live branch, alongside a nice list of fixes, balance changes, and additions in the latest build.

Overall, the new build should be more stable, and Forgotten Empires says crashes and freezes should be much less likely now. The developer says it’s also made several balance changes to civilisations, and many of the adjustments and fixes included in the new patch have come thanks to feedback from users who have participated in the public update preview program – so well done all around.

Hand cannoneers have gotten a 10% boost to accuracy, while heavy cavalry archers have had their attack animations increased by two hundredths of a second. Getting into specific civ balance changes, Burgundian Flemish militia no longer deal two bonus damage to buildings, and the Flemish Revolution technology cost has been increased from 800 francs and 450 gold to 1,2000 francs and 650 gold.

It's HERE! #AOE2DE update 50292 has arrived, with a MASSIVE list of QoL adjustments, crash and bug fixes, and more! This includes: Co-Op is now on the LIVE game, Empire Wars in Ranked Queue, Capture Age UI support, and Lords of the West Event! GET READY 📜 https://t.co/j5TXGurTPO pic.twitter.com/AwtIccmCvJ

Persian elite war elephants now train six seconds faster (down to 25 seconds), and they now cost 170 francs and 85 gold. Slavs will find the elite boyars have gotten a +2 boost to armour, and Turks no longer have to spend stone to unlock the artillery unique technology – that cost has been replaced with wood, so the unlock now will run you 500 gold and 450 wood.

There’s plenty more in the patch notes to pore over, including 11 new maps and the new inclusion of Empire Wars in ranked play. Have a look through it while you think about who you want to take with you into your next co-op battle.