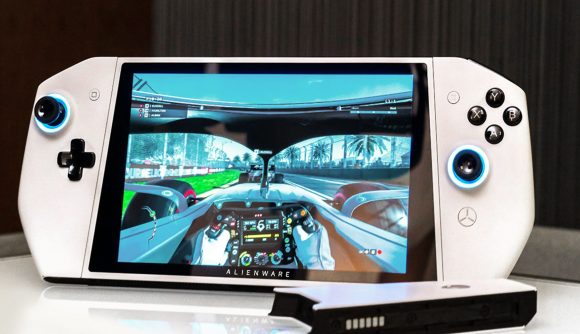 Announced at CES 2020, Alienware’s Concept UFO handheld, which looks mightily like a Nintendo Switch, is powered by an Intel 10th Gen processor – Intel Ice Lake to you and me.

Over at the DellExperience show at CES 2020, Dell’s new gaming lead Vivian Lien confirmed that the prototype Concept UFO, which is yet to be confirmed for release anytime soon (or ever), is utilising an Intel 10th Gen Core processor. We’d take a guess as to say it’s Intel’s Core i7 1065G7 that’s powering this portable gaming PC.

That chip has a full compliment of Iris Plus Graphics, with a total of 64 EUs for moderately beefy graphics power compared to older integrated graphics chips. That appears to be enough to power some triple-A titles on Alienware’s 1200p handheld. Intel is planning on scaling the EU count once again with Ice Lake’s successor, Tiger Lake, powered by Intel Xe, which could spawn a whole range of mobile gaming machines capable of playing the latest games.

Intel demonstrated Tiger Lake and DG1 graphics playing Destiny 2 on a thin and light at its CES press conference.

We have to admit the decision to include Intel 10th Gen comes as a bit of a surprise. We were sure that, following the announcement of AMD’s Ryzen 4000 APUs, Alienware would be leaning on the Frank Azor connection for a hook up with future product.

Project UFO is a handheld PC gaming device, complete with Windows 10 for full library support. It bears striking resemblance to the Nintendo Switch, with joycon style removeable controller support and all.