The Computex 2019 trade show has been dominated by AMD this year. Try as they might to talk Nvidia Studio or Intel Ice Lake or Project Athena it’s the announcement of Ryzen 3000 processors and Navi RX 5000 graphics cards that has got the PC tech world excited. But even leading up to the launch of the red team’s new GPUs AMD is posting graphics card market share gains, though surprisingly not at the expense of Nvidia.

The new Q1 2019 GPU report, from the number-crunching funsters over at Jon Peddie Research, makes for pretty good reading for AMD. Well… so long as you ignore the bit about overall GPU shipments falling by 19% compared with the end of last year anyway.

As well as showing a 21% gain in desktop GPU shipments in the first quarter of this year, despite Q1 traditionally being a relatively quiet period in graphics card sales, AMD has also shown a 2.3% GPU market share increase. You might naturally expect that to have come at the expense of long-time rivals, Nvidia, but they’re not the ones suffering… it’s Intel.

So, not content with giving Intel a swift boot in the CPUs, AMD is also giving the chip-manufacturing giant a rough time in the GPU market too. Now, with Intel not set to release a discrete graphics card until the Intel Xe GPUs arrive next year, AMD’s market share gains are coming from the laptop side of the graphics accelerating equation.

El Peddirino puts it down to Intel struggling to increase production volumes of its 10nm parts, creating a shortage in the broader 14nm landscape, and therefore lowering sales across the board. 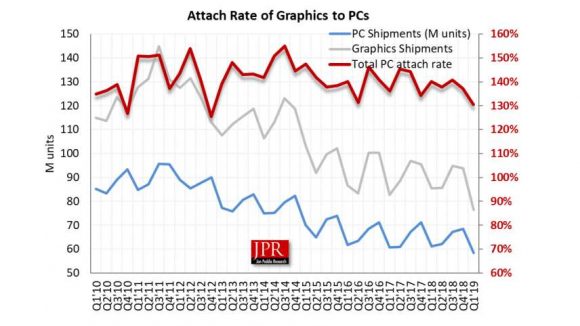 In that context Intel’s GPU market share dropped 3.4% with Nvidia gaining that remaining extra market share percentage point off the back of its rival’s manufacturing troubles.

While AMD’s 21% boost in desktop GPU shipments looks good, largely off the back of reduced pricing on its Polaris-based cards, such as the RX 590, RX 580 and RX 570, the overall trends don’t look anywhere near as positive. Compared with the same quarter last year total GPU shipments have declined by over 10%.

With both Intel and AMD launching new PC platforms over the coming months, and Nvidia likely to respond to Navi with something potentially “super,” the second half of the year will surely look far more promising. Just don’t expect the interim Q2 report to be in any way rosy before we actually get there…