Looking for the very best Anthem weapons to help round out your Javelin setup? Anthem Masterwork and Legendary weapons are the crème de la crème of loot. By the time you’ve reached the final grind and are getting better equipment daily you will want to set your sights on some key Masterworks and Legendary guns to finish off your favourite Anthem builds.

Anthem features a similar endgame grind to many of the best-known looter shooters like The Division and Destiny. It’s not enough to just have a good weapon that deals solid damage with every shot – you need to have the best weapon with a unique trait that feeds back into your abilities.

These come in the form of both Masterworks and Anthem Legendary weapons. These are versions of the basic guns with increased firepower, a fancy name, and some special perks. They catapult your damage output from good to epic and will help you conquer the hardest challenges.

How can you get hold of these incredible weapons though? Well, so long as you’re at max rank (check out our Anthem leveling tips for help), then simply make sure you’re playing missions on the highest difficulty to boost your chances of getting one of these beasts. You can get them as rare item drops, but there is a way you can always get one. The only confirmed way of always getting one of the Masterworks is by completing a Stronghold on Grandmaster difficulty. If you do this, then you will get access to the best Anthem weapons. 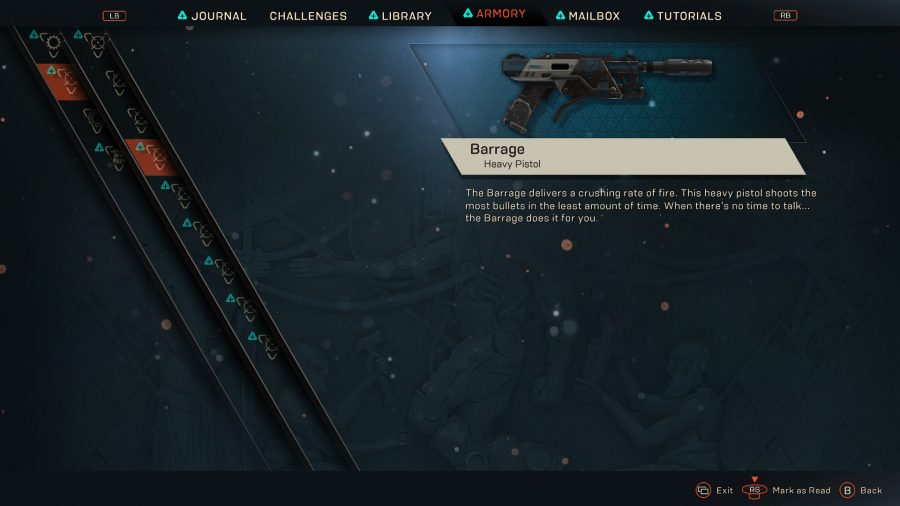 This is the upgraded Blastback, which is a hand cannon with the Raptor’s Deadeye perk that packs a whopping amount of damage into every shot. Raptor’s Deadeye massively increases damage while you are hovering, making this a great weapon for your Anthem Storm build.

Close Encounter
An upgraded version of the Barrage, this pistol has a very high rate of fire at the expense of its general damage output per shot. Picking up the slack for that, though, is the Scout’s Fury perk. As it increases weapon damage after a freelancer dashes, it’s quite a nifty pick up for a melee fighter.

Glorious Result
The Glorious Result is a heavy pistol with a solid fire rate that you can pick up by upgrading the Resolution. As It comes with Gunslinger’s Fury perk, weapon damage will increase after hitting multiple enemy weak points. This may be one of the best Anthem weapons for you if you fancy yourself a bit of a sharpshooter or want to get better at dealing max damage to single targets. 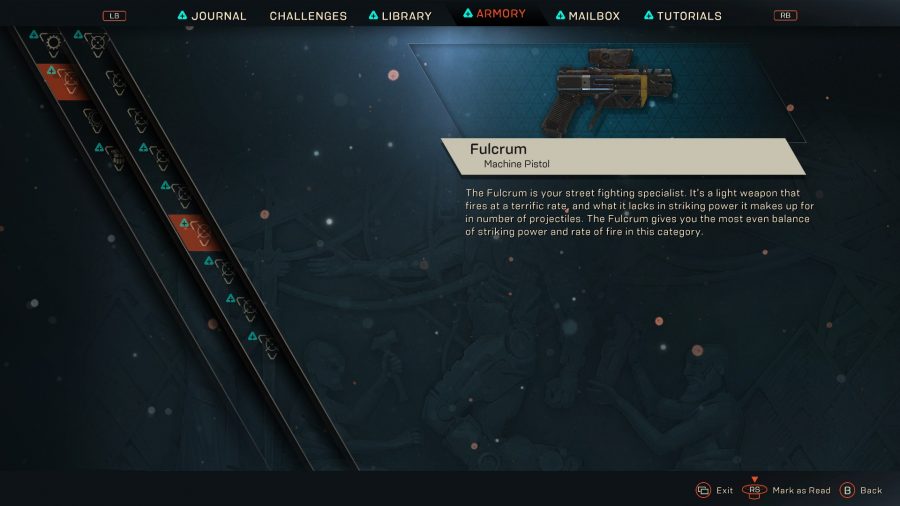 The Retaliation of Garretus is an upgraded Trajector. It has a longer range than most of the machine pistols, but a lower rate of fire. It comes with Gambler’s Wrath, which rewards you for sitting on the edge of death by increasing weapon damage when your health reaches critical levels.

An upgraded take on the Hailstorm, it is by far the fastest firing, but also the least accurate in this class of weapons. When striking an enemy with a melee attack it restores ammo to the magazine of your weapon, which makes this stellar choice for your Anthem Interceptor build.

The Unending Battle is the upgraded Fulcrum. This is the medium point of the machine pistols and boasts both a decent rate of fire and good damage per shot. Because It has the Gladiator’s Wrath perk, damage of both your weapons and your melee attacks increase when you hit an enemy at point-blank range – another solid pick for the Interceptor. 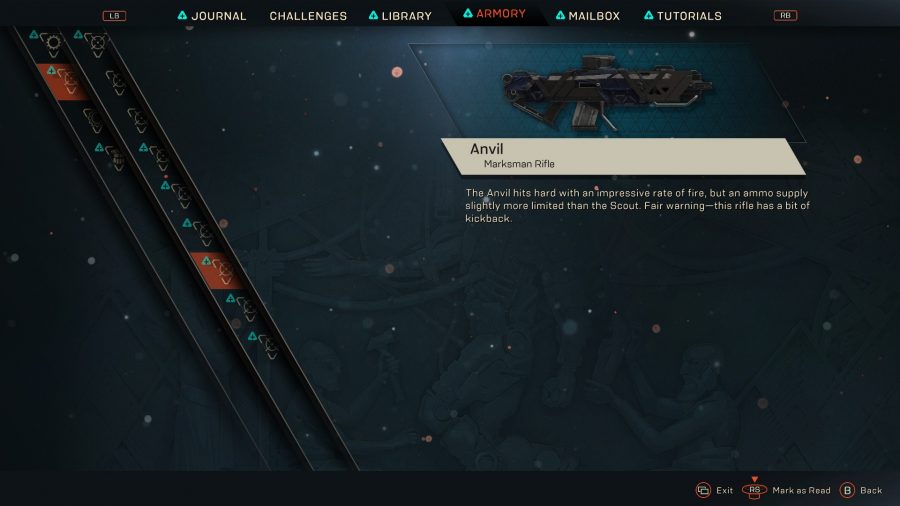 The Death from Above is an upgraded version of the Guardian. It fires shots in a three-round burst and has the special perk Raptor’s Sense. Raptor’s Sense makes this one of the best Anthem Masterwork weapons for a Storm build, as it increases damage to enemy weak points by 65% while hovering.

Soothing Touch is an upgraded version of the Anvil. It hits incredibly hard but has a bit of recoil in order to keep things fair. It comes with the Striker’s Balance perk, which makes you increasingly accurate the more damage you deal. It reduces recoil for each hit you deliver and can stack as well. This is an wonderful choice for those who prefer to fight at a longer range but still use automatic fire. It’s also great for taking down bosses, too.

This is the upgraded version of the Scout Marksman Rifle. Thunderbolt of Yvenia is a semi-automatic rifle that has great accuracy as a result. It comes equipped with The Thunderbolt perk. True to its name, the perk has a chance of dealing huge electric damage to whatever you are shooting. This is great if you have already boosted your character’s electric damage for skills. 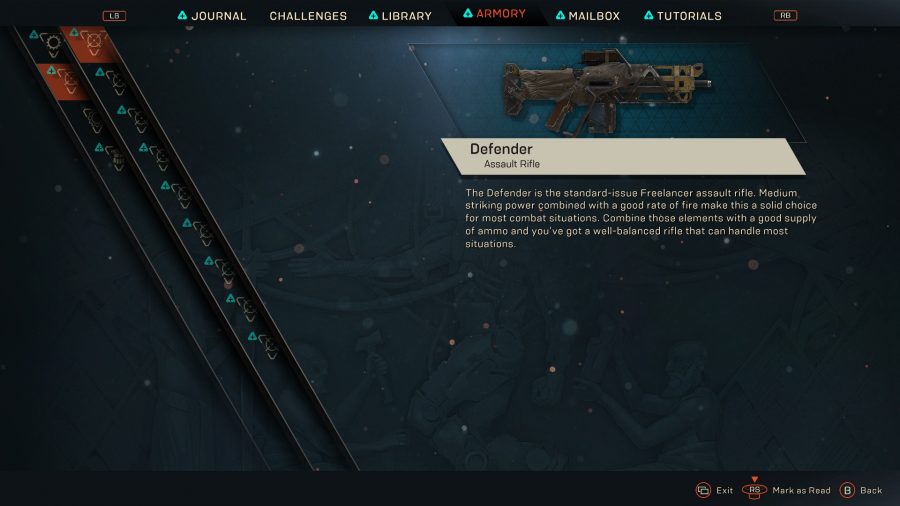 Divine Vengeance is the upgraded version of the Warden. It fires in a four-shot burst and is good for laying down covering fire and taking out units without having to lift your finger off the trigger. It has an immensely powerful ability as long as you can stay on target. Every third weak point hit causes a large fire explosion which deals even more damage. This is a huge boon to those who know Anthem’s enemy types well and is probably one of the best Anthem weapons. Combine with an Ice Primer to keep enemies in place and make hitting their weak points much easier.

The upgraded Defender is a run of the mill assault rifle. It has a decent rate of fire and is good for whittling down the health of large targets. As this version has the Veteran’s Furor perk, elemental damage will increase by a small amount every time you hit an Elite enemy. This can stack multiple times and can double your damage output if you time everything right.

Ralner’s Blaze is the Hammerhead but better because it is the hardest hitting of the assault rifles. What i’m saying is, it really packs a punch. The reason for the name of this Anthem Masterwork weapon is because a hit-streak causes the enemy to burst into flames. Another one that is great if you have the right components. 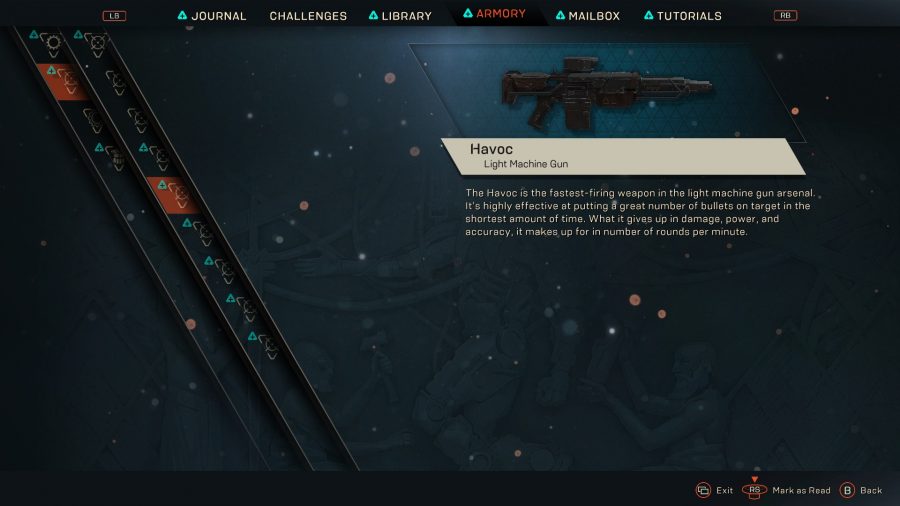 This is the upgraded Relentless. It is the most balanced of the LMGs and is great for charging straight in to a crowd of ads. It also has a brilliant ability if used in the right build. Upon reloading Artinia’s Gambit you’ll detonate a combo explosion in the immediate area around you. This makes it an excellent choice for an Interceptor or Anthem Colossus build.

Cycle of Pain is aptly named as it is the final form of the Sledgehammer and deals more damage per shot, despite a slower rate of fire. It also rewards freelancers with a steady hand with its Marksman’s Swiftness perk. The perk works by improving the rate of fire every time you land a hit on an enemy’s weak point. It might not be the flashiest of the Anthem Legendary weapons, but it gets the job done.

This is the Masterwork version of Havoc. It’s the fastest firing LMG but also the least accurate – so you’ll want to be face-to-face with an enemy when using this most of the time. Survivor’s Balance’s perk, however, improves recoil significantly and makes the weapon all the more manageable. 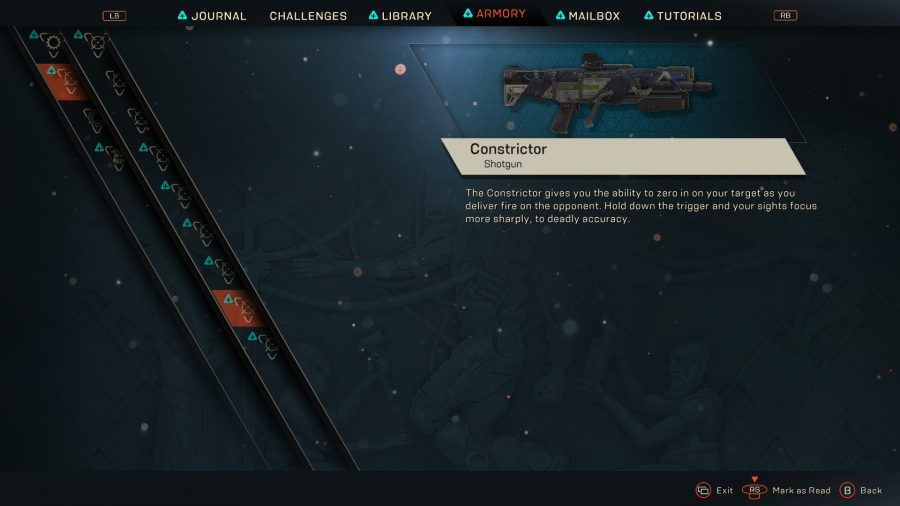 The upgraded Scattershot Papa Pump shotgun is both the best named weapon and is best when used up close. When you reload this weapon, it increases both the damage and knockback of Papa Pump. This makes it good for clearing a path through enemies and pumping out enough damage to stagger tough opponents.

This is the upgraded Constrictor. As you hold the trigger it focuses the fire of the weapon – making it much better at range than most, but slow to fire consecutive shots. If you can land most of the pellets in a shot it will partially recharge your shields. Not a bad choice if you have set your character up for shield power over health.

The upgraded Vengeance fires two-shell bursts and hits with an exceptionally high amount of damage. It comes with Scout’s Advantage perk, which increases damage whenever you dash. Making it perfect for hit-and-run attacks.

As it’s a combination of both a sniper and an assault rifle, the Siege Breaker is better up close than most snipers. To get your hands on this gun you’ll need to upgrade the Whirlwind. If you can score a hit-streak on a target it will freeze them solid. Perfect for locking an enemy out of combat and exposing their weak points.

This is one of the best Anthem weapons because, rather than standard shots, it fires hugely damaging explosive rounds. An upgraded version of the Devastator, it will detonate any combos if you land a shot on an enemy weak point. We reckon it’s probably the best Anthem weapon for a Storm who is set up for Ice Primers.

The Wyvern Blitz is the upgraded Deadeye. It is a very well-balanced sniper rifle that excels when trying to one-hit an enemy. As it comes with Raptor’s Sense, the sniper deals extra damage when hovering. This is great if you prefer to fight from the air instead of putting your boots on the ground. 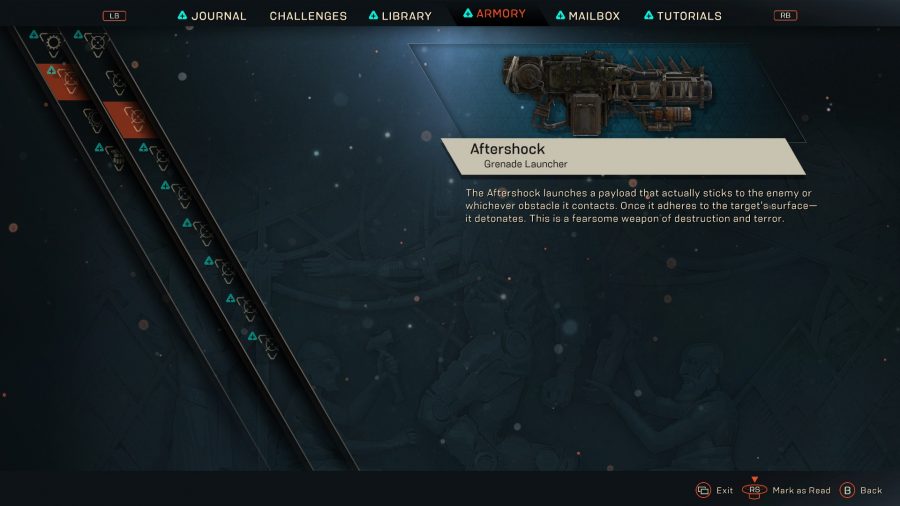 The upgraded form of the Bombardier, it fires grenades that bounce a bit before they explode to deal damage. It also comes with a perk called Victor’s Bulwark that clears any negative effects on you whenever you kill off an enemy with it, which is handy for keeping you in the fight.

This upgraded version of the Aftershock can fire grenades that stick to enemies before going off and dealing damage to both them and anything around them. The grenades generate an acid effect over a small area if you are on a kill-streak. This makes it one of the best Anthem weapons for crowd control.

The upgraded Lurker is great for covering a bottleneck as it fires mines that you can detonate manually. If you manage to hit multiple enemies with it then it restores some armour. This makes it one of the best Anthem Masterwork weapons for holding your ground. 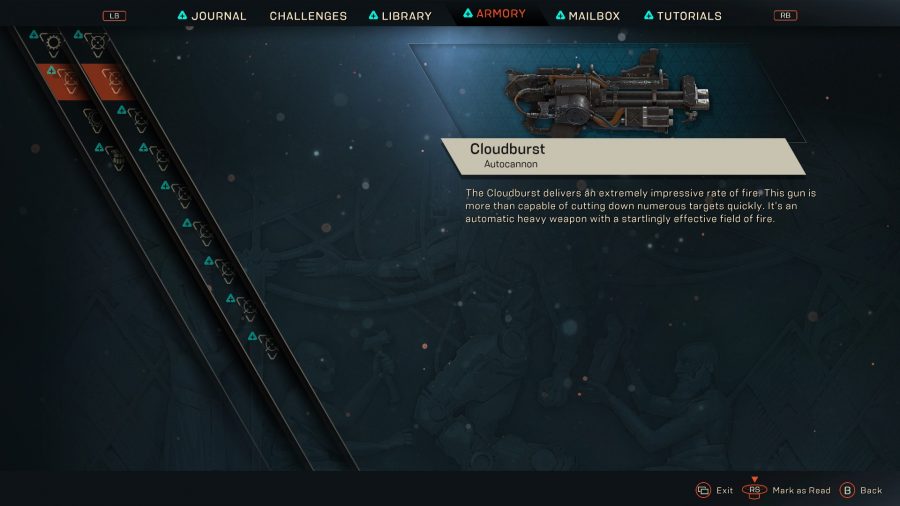 This is the upgraded Torrent and It becomes steadily more accurate the longer you are firing for. The Endless Siege’s perk gives it increased damage and magazine size.

The upgraded Cloudburst has an exceptional rate of fire. This makes it a little tricky to handle as a result though. It has the Striker’s Fury perk, which increases weapon damage when you hit enemies. This is a good shout if you are going up against one big target like a Stronghold boss or Ursix.

The Last Stand is the upgraded Mauler and it’s the heaviest hitting of the Autocannons and good for that tank-like feel. Thanks to the Gambler’s Wrath perk, you’ll do increased damage when your suit health declines past a certain point. It is good – as the name suggests – for a last stand as a Colossus.

On the look out: Some of our favourite Anthem Ranger builds

And there you have it, the best Anthem weapons and masterworks. Guns have always lead players on a fine chase, but Anthem’s set of toys stand out in not only giving you something satisfying to shoot, but another thing to factor into your Javelin builds, too.