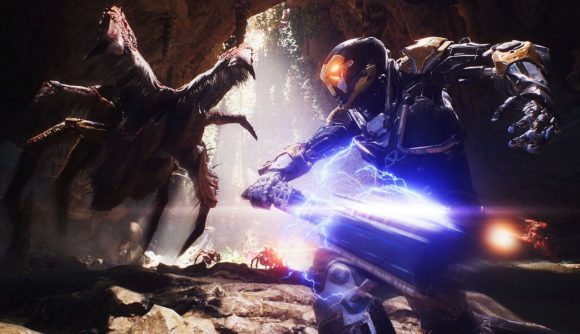 BioWare is gearing up for the launch of Mass Effect: Legendary Edition, but another sci-fi game in its portfolio is going to be in the crosshairs this week. According to reports, EA will be looking at the current version of Anthem and deciding whether work on it should continue, or that the entire project will be scrapped.

Three sources familiar with Anthem’s development spoke with Bloomberg about the status of the troubled multiplayer game, and said that executives at EA are set this week to examine ‘Anthem Next’, which is what BioWare has called the overhauled version of Anthem it’s been quietly working on for almost two years. Should EA’s brass decide to move forward with Anthem Next, the current team of 30 developers will need to be tripled in size. The alternative, of course, is to cancel the relaunch, writing off the work done on it to date as a loss.

Anthem’s launch was troubled, and BioWare struggled to keep up with complaints about its sci-fi open-world game. While Anthem was the fifth best-selling game of 2019, generating more than $100 million in revenue in its first month on sale, BioWare eventually acknowledged that Anthem “isn’t working” and pledged to go “back to the drawing board” to do a “complete overhaul.”

Since then, BioWare has made precious few public statements about the game. Its first anniversary passed without notice on BioWare’s and EA’s official social media channels.

Several key leaders on the Anthem team have since left the studio, including lead producer Ben Irving in August 2019 and executive producer Christian Dailey this past December.

While Anthem undoubtedly had its problems – notably with a tedious narrative hub and an unrewarding loot system – flying through the beautiful, primeval world around Fort Tarsis was a delight. We’re hoping Anthem gets its second chance.