Ah, Artifact: gone before we ever had a chance to get to know you. But is Artifact really gone? One YouTuber thinks Valve still has plans for the Dota-themed collectible card game, and has assembled the past year of rumours, speculation, and data-mining into a pretty convincing guess at what the relaunched version of Artifact might look like.

Tyler McVicker, who runs the unofficial Valve News Network channel on YouTube, says he believes a small team at Valve has successfully pitched a reworked version of Artifact to the rest of the company. Fundamental aspects of the game had to be changed, McVicker says, and some of Artifact’s original designers and their “disciples” had to be removed from the Artifact team. What’s left is rumoured to be a fully free-to-play version of Artifact with a stricter set of rules, supported by the battle pass business model that’s become popular since the rise of Fortnite.

In his video, McVicker acknowledges that everything about ‘Artifact 2.0’ is highly speculative at this point. That said, he makes a convincing case, and the picture he paints using leaks, rumours, developer comments, and data found in the game files is of a game that could certainly work. 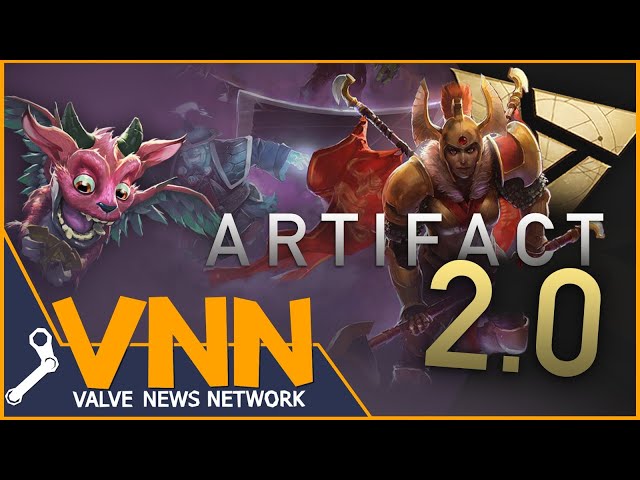 Datamining has revealed what appear to be pre-made ‘puzzle’ scenarios already built into the Artifact code, and McVicker reckons these will be part of any Artifact re-launch. Datamining has also hinted at the existence of an entire second card set, which includes ‘mutation‘ cards that can attach to heroes under certain circumstances – specifically by purchasing a ‘holder’ card from the shop during a game. In general, McVicker says, the game’s default rules will behave more predictably, with cards providing the means to alter and bend those rules and change the flow.

Changes to the game’s rules are only part of the puzzle, though. McVicker thinks the next version of Artifact will be “entirely” free to play, using the free vs. premium battle pass model that Dota Underlords will be launching later this month. Rather than having players buy and trade cards on the Steam marketplace, McVicker says every mechanical item in the game will be available to all players from day one.

Taking further cues from Underlords, this – again, highly speculative – new version of Artifact will be designed with a mobile-first interface, and allow for cross-play between PC and mobile devices.

McVicker says the Artifact team has already shown this version of the game off to the rest of Valve during a year-end playtest, and that it seems to have gotten a positive reception.

For its part, Valve hasn’t publicly commented on Artifact in nearly a year, so again, none of these rumours have been confirmed. We’ve reached out to Valve for comment, and will update this story if we hear back.