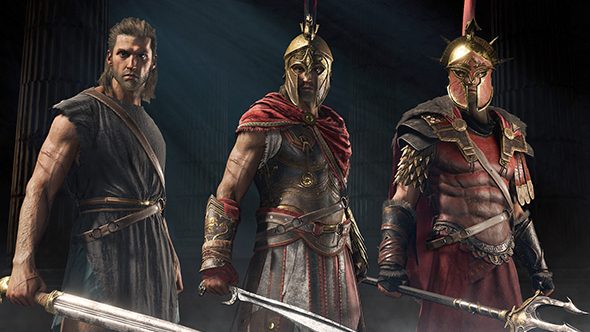 Assassin’s Creed Odyssey launches later this year, and if you want to pre-order you’ve got plenty of options. There are no fewer than six versions of the game available on PC alone, and the more advanced editions will even let you play a few days early – assuming you’re comfortable paying exorbitant sums for videogame pre-orders, of course.

Make the smartest budget choices for your gaming future by consulting our list of upcoming PC games.

Then there’s the Gold Edition. Priced at $99.99 / £83.99 / €99.99, this version includes the full season pass – with “new narrative arcs” and “recurring major story content,” and a bonus Secrets of Greece quest to play at launch. This also gives you early access to the game on October 2, a few days ahead of the official October 5 release date.

Hold on, because we’re not even halfway through yet. If you’re willing to up your purchase to $119.99 / £91.99 / €109.99 you can get the Ultimate Edition, which bundles the game, season pass, and bonus Deluxe content in one package. Truly a deal worthy of a Spartan.

But wait, as the people on TV used to tell me, there’s more! Available from the Ubisoft store, you can also get the Spartan Collector edition, including all the above game content, plus the 15-inch tall Spartan Leap statue, a steelbook case, 64-page art book, a lithograph from Hugo Puzzuoli of Ubisoft, a physical map, and a selected game soundtrack. All yours for just $159.99 US.

Yet doesn’t that statue seem incomplete standing alone? You can complete the set with Pantheon Collector edition, which includes all of the above bonuses plus a unique enemy figure to properly complete the diorama. If you’ve read this far you must be made of money, so you’ll have no problem dropping the $219.99 US necessary to bag this excellent prize.

Whether you’re springing for something special or just sticking with the standard game, today brought plenty of pertinent details about Assassin’s Creed Odyssey. We’ve got trailers and gameplay videos, gender options and dialogue choices, plus same-sex romances and minotaur fights. For more details on the game, including the Assassin’s Creed Odyssey release date, check out our everything we know feature, and stick with us for further E3 2018 coverage.