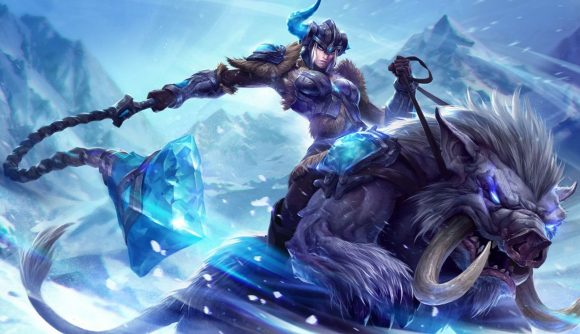 Ever since Assassin’s Creed Valhalla launched just under a month ago, players have been uncovering a whole bunch of easter eggs tucked away in the Viking game’s world. So far, references to The Lord of the Rings, The Prodigy, Dark Souls, Game of Thrones, and more have been unearthed – and now, it looks like there’s a nod to Riot Games’ flagship MOBA game League of Legends, too.

Narrative lead for skins and thematic development at Riot Jared Rosen has posted a brief clip on Twitter (included below) highlighting the easter egg. In some chatter between Eivor and an NPC called Birstan, the two discuss boars – “a majestic animal, don’t you think? Driven by a fierce fire, blazing eyes, and sword-tusks”, as the latter says. The open-world game’s protagonist then answers: “I once knew a strong-armed shield maiden who rode a boar into battle! She named it Bristle-bold”.

League of Legends fans will likely recognise this – it basically describes one of the multiplayer game’s iconic and long-time Champions, Sejuani. Also known as Fury of the North, she’s an armour-clad warrior hero paired with a boar mount called Bristle.

This find has been confirmed by one of the game’s script writers, too. Writer and narrative designer Samantha Webb, who wrote for Assassin’s Creed Valhalla, has posted: “Someone found it!” in reply to the tweet. Take a look below:

So, while Valhalla’s been out for nearly a month, it seems there are still easter eggs being – and possibly still to be – found in its big open world.