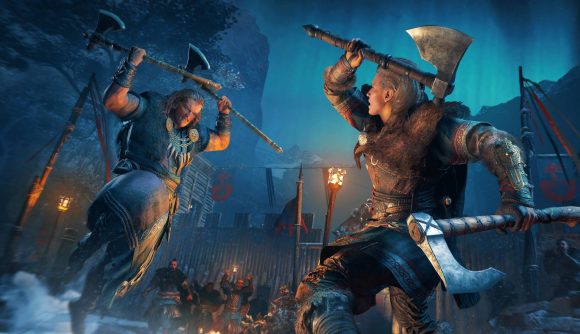 Assassin's Creed Valhalla is getting a major title update tomorrow, and it's adding the River Raid game mode, new abilities and skills, and lots more to the massive Viking game. The patch is due February 16, and it's scheduled to go out at 4:00 PST / 7:00 EST / 12:00 GMT. On PC, you can expect a download of around 18.04 GB.

There are a lot of pretty significant additions to Valhalla coming in Title Update 1.1.2, but perhaps the biggest is the River Raid game mode, which was announced back in December. It's a replayable mode where you'll take your unruly band of Jomsvikings pillaging on three new maps, where you'll be able to find silver, new loot, and plenty of new challenges. Ubisoft says the mode will be “accessible in-game” after downloading the patch, but does not tell us where we'll find it. A good place to start is probably at the barracks in Ravensthorpe.

Title Update 1.1.2 also introduces new skills and abilities for Eivor. The berserker trap attaches a charge to your arrow containing a hallucinatory powder. You'll fire the arrow to set the trap, which will spring whenever someone wanders by.

There’s also the new battle cry ability, which gives Eivor a boost to strength and terrifies nearby enemies, interrupting attacks. The new shoulder bash ability allows Eivor to shove enemies and even destroy objects (we’ll have to see if this works on loose stone walls).

New skills are being added to the tree, including Assassin Carry (automatically carry a body after a successful assassination) and Fight Ready (always start a fight with an adrenaline-filled slot). Unlocking Long Ship Brace means your crew will raise your shields when you do while you’re in command of the ship.

Begin your adventure: Grab your copy of Assassin’s Creed Valhalla

The patch addresses a host of minor balancing and technical problems. Specific to PC, it fixes some remaining issues with achievements unlocking in Ubisoft Connect, and they’ve finally fixed that issue with service errors popping up whenever you browse photos on the world map.

You can read the full patch notes here, but also be sure to check out our guide to Assassin’s Creed Valhalla Excalibur tablets. You’ll need all 11 to reforge the legendary blade.