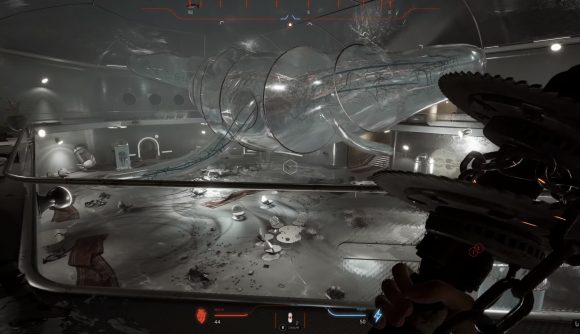 Atomic Heart is still pumping along, and there’s a new gameplay sequence available now that features some irritable plants, upsetting models, and a vicious-looking boss made of tendons and hatred. The video, which developer Mundfish posted yesterday, also features a score by Doom composer Mick Gordon. Let’s dive right in, shall we?

Atomic Heart is a surreal Bioshock-style game set in a strange and mysterious Soviet sci-fi world. We don’t know a whole lot about the game yet, but it’s a first-person shooter that has you exploring research facilities crawling with the products of various experiments. You see a lot of those in the footage below: as our hero enters the lavishly appointed facility, he’s quickly set upon by some extremely hostile potted plants.

Interestingly, the demo only shows off melee combat, even though the protagonist starts out holding what looks like a railgun of some kind. When the houseplants attack, he pulls out a two-handed weapon topped with two rotating circular saw blades. It’s heavy and slow, and the footage shows a lot of missed swings in the heat of combat.

Here’s the video, which you can watch in 4K if you’re fancy: 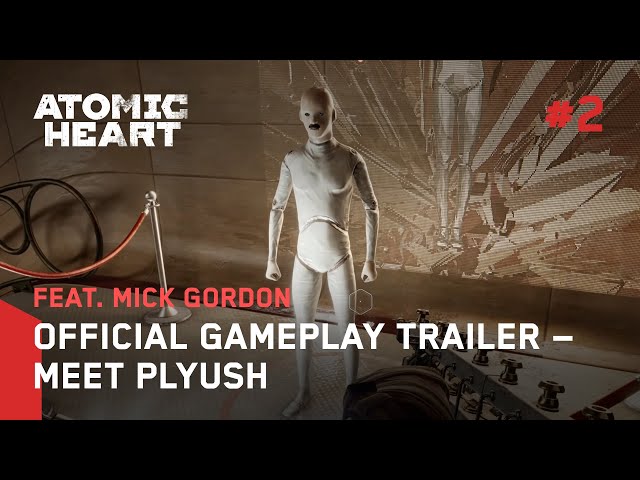 Moving deeper into the facility, our hero comes upon an open area where a diaphanous whale model hangs from the ceiling, its internal organs visible through the translucent material that makes up the outside. There’s not much time to admire it, however – on the floor below are several corpses, and a mound of flesh near one end of the room suddenly sprouts an arm. Then legs.

It’s a boss named Plyush, and it’s pretty mean. It looks like a roiling mass of bloody cables wrapped around a mouth, and it moves around pretty quickly. The player continues using the two-handed saw weapon, but it has another mode – after putting some distance between himself and the monster, the player activates the weapon with what looks like a kick-start.

When Plyush attacks again, our hero aims the weapon in its direction, and the blades charge with electrical energy, then fly off the handle and begin tracking the monster’s movements. Things look like they’re tilting in the player’s favour – until they definitely aren’t.

Atomic Heart gave us another teaser showing off its robotic vision of the future earlier this summer, and the more we see of it the more it looks like it has as much in common with horror games as it does with fellow FPS games. We’ll find out more when we get closer to the release date, which is yet to be announced.