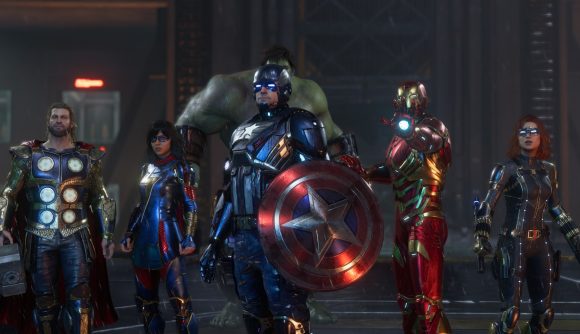 Marvel’s Avengers hasn’t exactly found a receptive audience on PC in its first year, but its fortunes could be about to change. The superhero co-op game will be coming to Xbox Game Pass at the end of the month, and that includes Game Pass for PC.

If you’re just tuning in, Marvel’s Avengers is a co-op focused live-service game that lets you play as any one of an expanding roster of Avengers heroes. The initial Reassemble campaign centres on Ms. Marvel, Kamala Khan, who sets out to get the Avengers team back together after a catastrophic disaster known as A-Day.

Since it launched, Marvel’s Avengers has seen several add-on campaigns added which have introduced new characters, the most recent being the new War for Wakanda campaign that brings Black Panther into the mix. Each character has their own set of unique combat and traversal moves, as well as a signature mechanic for building up ultimate energy. If you play as the Incredible Hulk, you can pick up an enemy mook in each hand and clap them together like chalkboard erasers, and Thor’s Mjolnir makes an oh-so-satisfying ‘DONK’ sound when it hits a bad guy in the chin.

In short, it’s a game well worth checking out if you have any interest at all in Marvel’s characters, and while players have complained about the repetitive endgame, that’s been filled out substantially by post-launch content.

Marvel's Avengers is coming with Xbox Game Pass on September 30!

All year-one content is included! Play all 9 Heroes, the Reassemble Campaign, three Operations, and the ever-evolving Avengers Initiative for endless multiplayer action.

It’s also, however, a game that a lot more players might be more interested in looking into if they weren’t being asked to pay full retail price upfront for it – which means it’s a perfect fit for Xbox Game Pass on PC. Marvel’s Avengers will be available on Microsoft’s subscription service September 30.