Crowbar Collective, the creators of Half-Life fan remake Black Mesa, says its game is nearing the end of its five-year sojourn through Steam’s early access program. Version 1.0 of Black Mesa is just about ready to go into beta testing, with a full release expected to follow shortly after.

The developers have posted a preview of Black Mesa 1.0 on Steam that explains a bit of what fans can expect in the release candidate version of Black Mesa, which will be available soon on the game’s beta branch (they also note that it’s 20% off during the Steam Lunar New Year sale).

According to Crowbar Collective, the biggest single change players will see in 1.0 is a total overhaul to the AI for HECU Marines. “Soldiers will now lay down suppressing fire, flank your position, communicate more, throw grenades more effectively, use their MP5 grenade launchers, and more,” they write.

The revamped AI has led the team to redesign some of the game’s combat environments to better take advantage of the enemies’ newfound smarts. The team has also identified and reworked a few areas in the game where they say the pace of gameplay “came to a grinding halt.”

The Steam post also showcases a new art pass on certain outdoor areas in Black Mesa, specifically in the Earthbound section, which Crowbar Collective says it has brought up to the art standard set by its recent work on the Xen areas. 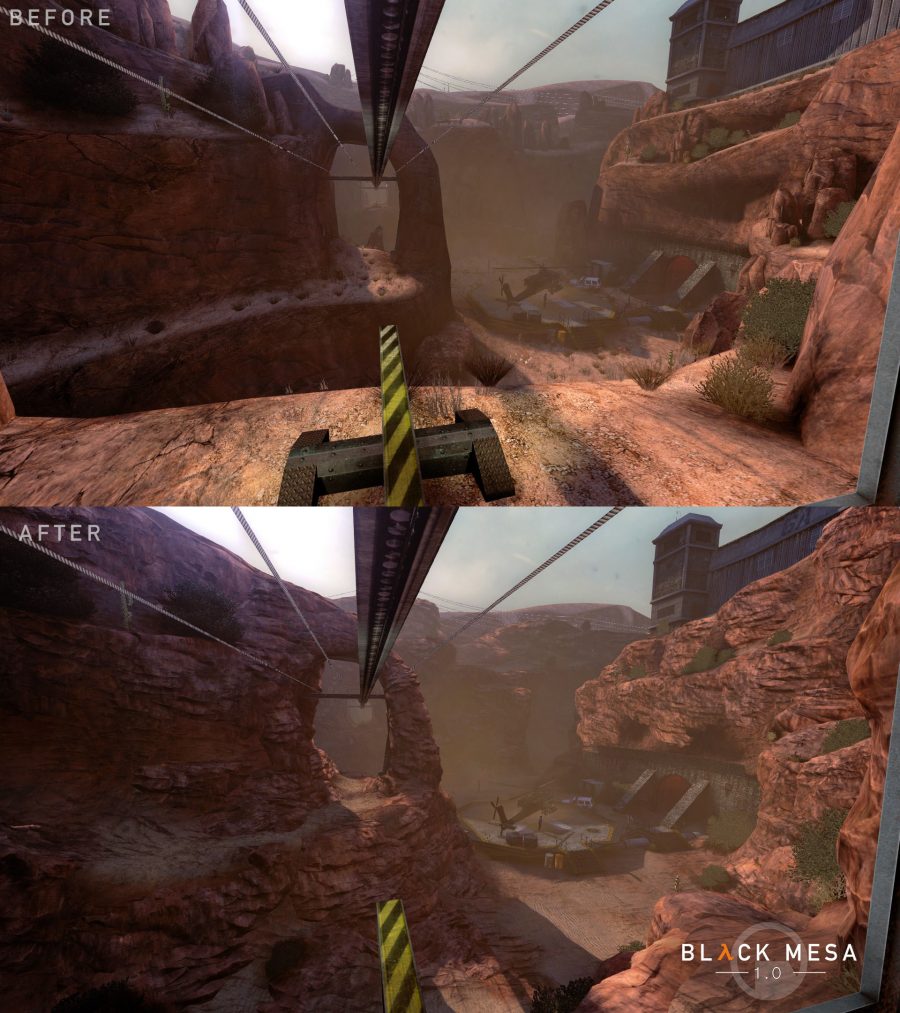 It’s clear from the screenshots provided that the new pass has paid off: the rocky terrain looks much more believably rocky, and many of the awkward straight polygon edges have been rounded to create a more natural-looking environment. There’s more of the scrubby vegetation, too, and overall there’s a nicer play between highlight and shadow in these scenes.

The beta branch for Black Mesa 1.0 will become available soon, but Crowbar Collective doesn’t have a specific date set yet. After some thorough internal and external testing, the studio will be set to move Black Mesa out of early access for good.

After that, Crowbar Collective says it plans on continuing to support the title while working toward a 1.5 version, which it has jokingly dubbed Black Mesa: The Definitive Edition. The studio emphasises that this is just an in-house gag among the developers though, and that nobody will have to buy another version of the game – version 1.5 will be introduced by a normal patch that adds some gameplay tweaks and art enhancements, along with improved Workshop support and Source engine documentation.

“After years of loving/hating/fixing/breaking the Source engine, we would love to help others get information and solve problems,” the studio says.

Black Mesa is a great way to get back up to speed on Half-Life lore before Half Life: Alyx launches in March – or you could always play the original games, which Valve has made free to play on Steam until the release of Alyx.