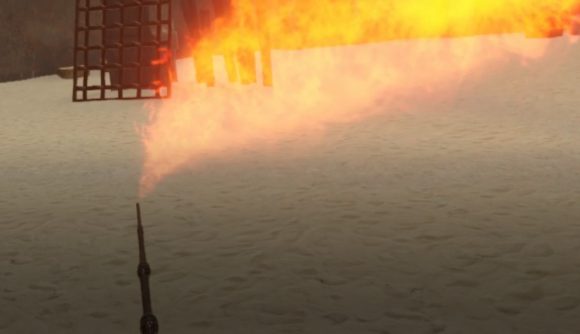 While we wait to hear more about that Harry Potter open-world RPG that’s in development, here’s a mod that turns fantasy VR game Blade and Sorcery into a full-on wizarding world adventure.

The Witchcraft and Wizardry mod for Blade and Sorcery is a conversion mod on Nexus Mods that transforms the map, equipment, and abilities into those from the Harry Potter universe. Using the modification, you’ll be given a wand with six spells, including the killing spell Avada Kedavera and fire spell Incendio, and Harry’s trust broom the Nimbus 2000 for flying around. Two locations, a Quidditch field and Diagon Alley, are available for wandering, and a number of relics from Hogwarts can be found, like the sword of Gryffindor, the Basilisk Tooth, and the Golden Snitch.

Mod creator Piepop101 lists what’s in the pipeline, too. Most of the major characters are in the works, from Harry, Ron, and Hermione, to Professor Dumbledore, Professor Snape, and Voldemort, and most of the accompanying wands. Hogwarts itself will be added at some stage, including Dumbledore’s office, and more spells, like Wingardium Leviosa for levitation, and Expelliarmus for disarming enemies. Two new brooms, and the coveted golden egg from Harry Potter and the Goblet of Fire, are listed, too.

Since we haven’t seen much in the way of Harry Potter games of late, fans have taken to just making them themselves. Another expansive project is this Harry Potter map for Minecraft, that includes a fully explorable Hogwarts, and a loose RPG storyline.

If all you really wanted is some Quidditch, Broomstick League should scratch that itch. You can check out our lists of the best sandbox games, best open-world games, and best free games, for more suggestions. As always, mod with caution.