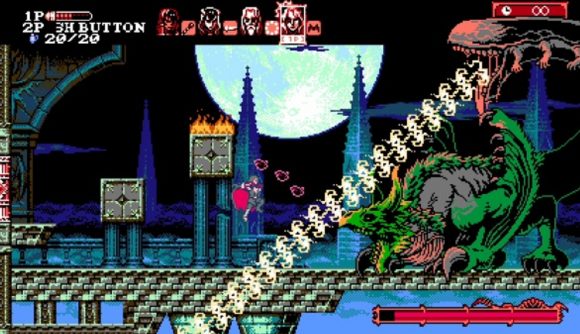 It takes a certain level of popularity for a spinoff to get a sequel before the main series, but that’s what’s happened as Bloodstained: Curse of the Moon 2‘s release is now imminent. Conceived as an 8-bit companion game for Bloodstained: Ritual of the Night, fans enjoyed the first Curse of the Moon so much, a second will be with us in just two weeks.

As announced in the trailer below, Bloodstained: Curse of the Moon 2 will deliver more classic Castlevania action on July 10. Developer Inti Creates unveils some of the features for the sequel, such as the character roster, which includes three members from the original games, Miriam, Alfred, and Gebel, in addition to the four fresh faces already revealed.

There will be two-player co-op, and it has some nifty mechanics to keep you and your friend enthralled. You can warp to each other’s locations at the touch of a button, you can make yourself a mascot for the other player and let them control you, and if you jump on top of your friend, you can execute some special moves to really up your scores.

The Bloodstained games are the brain-product of legendary Castlevania director Koji Igarashi, who pitched Bloodstained: Ritual of the Night as a spiritual successor to 1997’s Castlevania: Symphony of the Night in a Kickstarter in 2017. The crowdfunding was so successful, fans were given Curse of the Moon, a retro platform game modeled after the NES Castlevania adventures of the eighties. Bloodstained has continued to be a hit, the main game shifting over a million copies to date.

Both Bloodstained: Ritual of the Night and Bloodstained: Curse of the Moon are reduced at the moment, as part of the Steam summer sale. We have recommendations of the best horror games and best zombie games, if you want more gruesome action.