I’m going to be blunt. The Call of Duty: Vanguard beta is a bit of a mess. Sure, it’s the first time we’re getting hands on with it on PC, but Vanguard has already been through two PlayStation-exclusive test runs ahead of this weekend’s crossplay beta, and many of the issues I’ve encountered were present then, too. Server issues are turning matches into slideshows, the audio sounds muffled, but the biggest problem is that even when everything is working as it should be I’m struggling to see a damn thing.

Visibility while I’m sprinting around the map isn’t too bad. There’s some haze at mid-range, which can make spotting snipers pretty difficult, but character models show up just fine for the most part. However, the moment I pull my trigger the mixture of muzzle flash and smoke that spits out makes tracking enemies more challenging than managing recoil. Even with all motion blur effects turned off, and the benefit of global distortion also being disabled for the open beta, I find that my best chance of winning a duel is to aim for the bright red player nameplate.

Perhaps in the pursuit of visual fidelity, these effects are especially intrusive when firing indoors – a baffling concession to realism in a game with tiny remote-controlled tanks and portable, semi-automatic grenade launchers – and in some cases muzzle flash can obscure more than a third of your screen. This is exacerbated by the clouds of dust and debris that kick up whenever your shots hit a surface, and the smoke that billows out of the ejector port. It does look pretty dazzling, but it makes for a horrible experience in a fast-paced FPS series like Call of Duty.

While we’re on the subject of pretty visuals, I should mention that the maps are gorgeous – easily the best-looking multiplayer arenas the series has offered in years, possibly ever. A rooftop battle through the penthouse restaurant of the Hotel Royal is a showstopper, with its immaculate interior of rich red velvet upholstery, marble, and perfectly varnished wood panels contrasting against the muted greys of the rooftops that surround the interior. Watching the resplendent Art Nouveau bar being torn to pieces in a blender of grenades and heavy machine-gun fire would turn an interior designer’s stomach, but for the rest of us it’s a joy to behold. 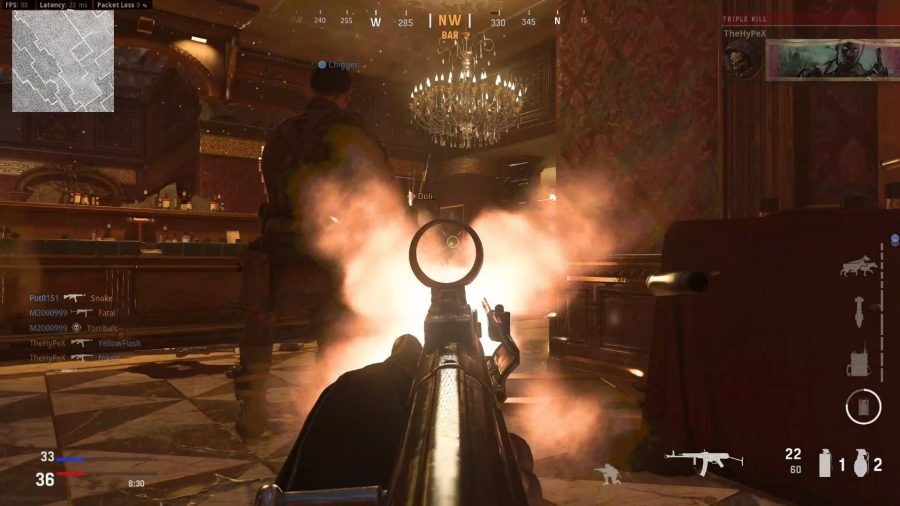 But as you may imagine, it’s hard to pick out a target in such chaos, and it’s not just flying debris and muzzle flash that’s making enemies hard to spot. Lens flare, especially on Gavutu, can completely cover the centre of your screen with a blinding rainbow disk, which vanishes and reappears like an apparition.

Then there’s the lack of factions, which means that every now and then I find myself running into battle alongside an enemy, neither of us realising we’re on opposite sides until we turn and a red nameplate flashes up. This happens a lot during the beta, thanks to some easily exploitable spawn points.

It’s a shame, because when everything is working I’m generally enjoying my time in Vanguard. Gunsmith has made the return to a WWII setting much less tedious than I expected, and the emphasis on experimental war tech means the arsenal is full of curious antiques like revolving shotguns and the late-war Volkssturmgewehr. Destruction keeps maps from feeling too stale, opening fresh lines of sight and flanking routes organically as the war wages on, even if the process is less spectacular and more random, and thus harder to intentionally exploit, than in Battlefield or Rainbow Six Siege. 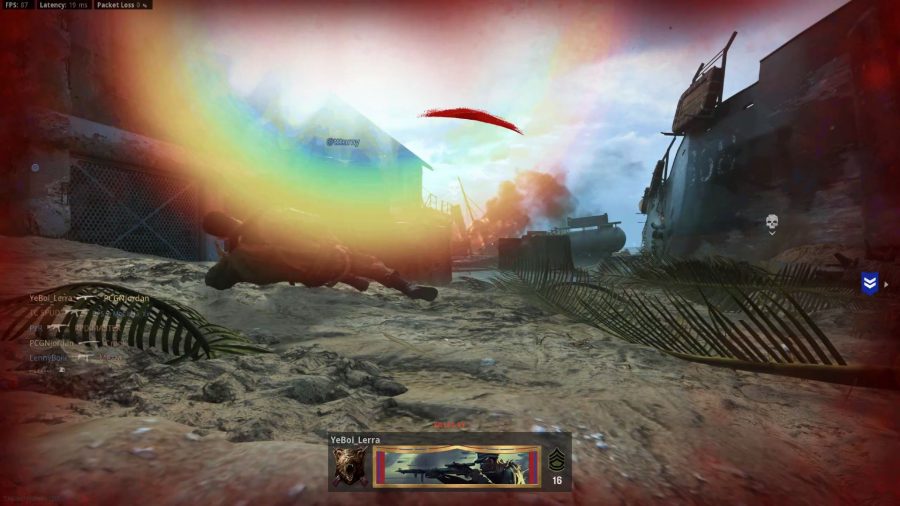 And then there’s the new Patrol mode, which sees one capture point move slowly across the map like Sauron’s gaze, doing away with much of the frustration of modes like Headquarters in which you’ll often travel the length of the map only to be gunned down the second you approach the objective.

Hopefully, the issues I’m experiencing can be fixed in time for the Vanguard release date on November 5, because I’m already feeling weary trying to track targets after half a dozen hours in the beta.