Want to know what all of the Call of Duty Vanguard Zombies covenants do? You may notice the rather ominous looking altar in the central hub area as you start your Zombies run. This altar is where you can buy the new covenants that provide upgrades when equipped.

The key to surviving a Zombies run is to ensure that all of your upgrades have some level of synergy. While some combinations of covenants are powerful on their own, using them alongside particular Call of Duty Vanguard Zombies perks improves your chances of getting out alive. So, in a way, covenants can make the difference between life and death.

Before you go spending your hearts on the first upgrade that you see, it’s worth considering how well these covenants work with your current loadout and perks. Here’s what every Call of Duty Vanguard Zombies covenant does, as well as some tips for potential synergies worth considering for your run.

How to use the Altar of Covenants in Zombies

You can exchange sacrificial hearts earned by completing tasks. You can find these hearts by going through portals in the central hub. When you access the altar, you have a choice of three different covenants. You can buy and equip up to three covenants at any time, but you can choose to permanently replace an equipped covenant later on in your Zombies run.

Your choices refresh after every objective you complete, and each covenant has multiple rarities. While the nature of the bonus a covenant provides doesn’t change, rarer covenants give better quality bonuses. So, for example, the Unholy Ground covenant deals even more damage while you’re stationary if you use the epic tier version, than the rare tier version. In addition to giving the most bonuses to the covenant, Legendary covenants also increase your damage for a short time after you start moving, making them the most sought after upgrades.

These are the 11 unique Call of Duty Vanguard Zombies covenants at launch: 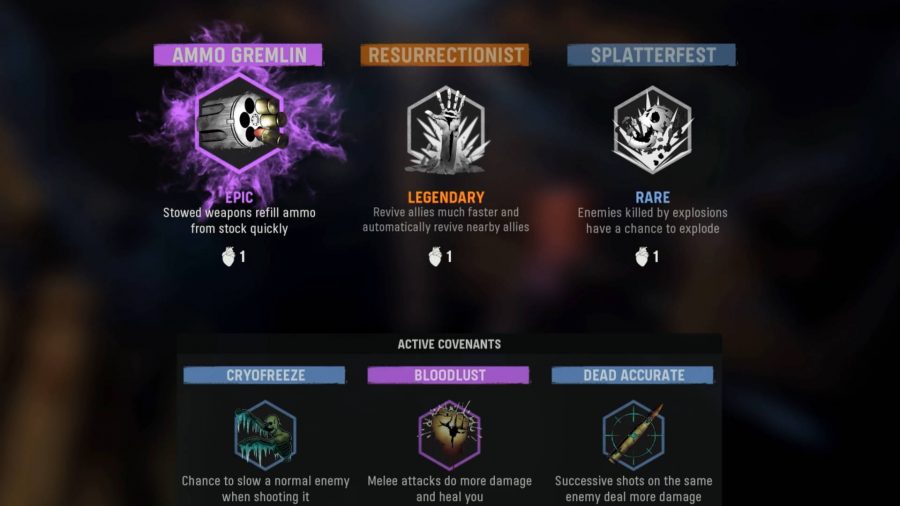 It’s still early days, but already it’s clear that some combinations of covenants and perks are worthy of consideration. The obvious synergy between two different covenants is Cryofreezer and Cull the Weak, but you can also combine both covenants with a fully upgraded Diabolical Damage perk and an automatic weapon like an assault rifle or SMG to deal maximum damage to slowed enemies. However, other options such as Mother Lode and Splatterfest incentivise you to throw more grenades at enemies, causing an explosive chain reaction to deal with large clusters of zombies.