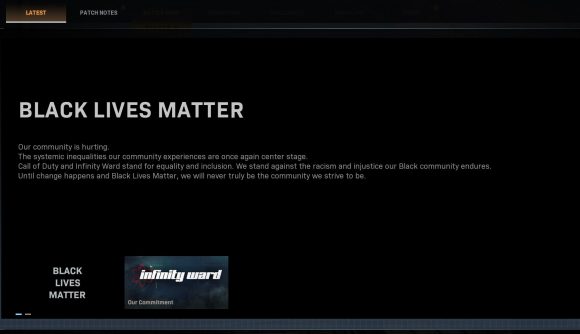 Call of Duty: Modern Warfare and Call of Duty: Warzone have added a new message to their in-game notifications. Now, when you load into Call of Duty’s multiplayer, you’ll be greeted with a pop-up message of support for the Black Lives Matter movement and for protesters around the world demonstrating against police brutality in the U.S.

“Our community is hurting,” the message reads. “The systemic inequalities our community experiences are once again center stage. Call of Duty and Infinity Ward stand for equality and inclusion. We stand against the racism and injustice our Black community endures. Until change happens and Black Lives Matter, we will never truly be the community we strive to be.”

As protests over police treatment of Black people have spread around the world, Infinity Ward has taken some concrete steps toward addressing racism in its community, notably by stepping up moderation enforcement against racist names in Call of Duty Modern Warfare and Warzone. The studio says it is adding additional filters and placing greater restrictions on name changes, and is increasing its use of permanent bans for repeat offenders.

The company has also delayed the start of new seasons for Modern Warfare and Warzone, as well as Call of Duty: Mobile.

A menu screen may be a minor matter in the grand scheme of things, but it’s an unfortunate fact that messages like these are considered controversial by some people. By expressing solidarity with and sympathy for the protests, Infinity Ward and Activision have indicated they believe it’s more important to do the right thing than it is to retain every possible player.