Looking for the Call of Duty: Modern Warfare Season 4 release date? Or perhaps you’re wondering what new content will be launching across Modern Warfare and Warzone?

The upcoming Modern Warfare and Warzone Season 4 launch promises dozens of additions to the game across core multiplayer and the Warzone battle royale mode, not to mention the season-long Modern Warfare battle pass that players will be grinding through from day one all the way up to the Season 4 end date. Among those changes are two new Warzone guns – likely to be the Galil and Vector – a new featured battle pass Operator, and new multiplayer maps like Scrapyard. Of course there will inevitably be plenty of bug fixes, quality of life changes, and hidden changes. Interestingly, however, it doesn’t look like Infinity Ward is changing the Warzone map at all, although time will tell.

So, how long have you got to grind for all those goodies? And how long before the next massive batch of changes arrives? Keep reading to find out the Modern Warfare Season 4 release date.

The Call of Duty: Modern Warfare and Warzone Season 4 release date is June 10 at 23:00 EDT.

This comes after the initial Season 4 date was delayed in response to the ongoing protests in the US over police brutality and racial inequality. “We are moving the launches of Modern Warfare Season 4 and Call of Duty: Mobile Season 7 to later dates”, reads a statement posted on the official Call of Duty Twitter account. “Right now it’s time for those speaking up for equality, justice and change to be seen and heard.”

Season 4 was scheduled to arrive on June 3, 2020. This date was first revealed in the very first Season 4 trailer, which you can watch here: 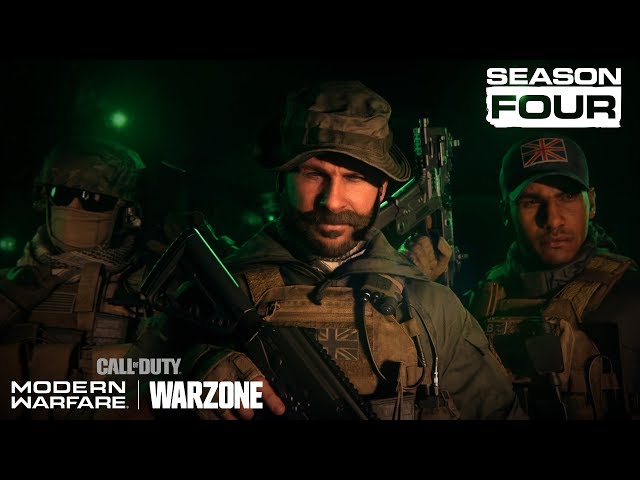 As you can see in the final few frames of that trailer, Captain Price and Gaz are both seen in the Warzone deployment screen, each one holding a new weapons. Price appears to be holding the much-rumoured Galil, while Gaz is holding what is clearly a Vector.

Finally, you can make out the classic Modern Warfare 2 map Scrapyard hidden in the letters of Season Four.

There are no official details on what Call of Duty: Modern Warfare Season 4 will bring to the game, but we do have a pretty solid idea of what the seasonal weapon additions will be. Modern Warfare dataminers have managed to actually get models of three weapons working in-game, including the Galil, Vector, and APC9. As these are the most complete models, it’s likely these will be the guns we get in Season 4.

Naturally, We’ll also get a new battle pass, one or two new multiplayer maps such as the aforementioned Scrapyard, and whole bunch of cosmetics.

Some players are also hoping that the ongoing Bunker 11 Warzone nuke easter egg will reveal more changes coming with Season 4. The leading theory is that those nukes will signal the end of the current Warzone map and usher in a new one, much like a Fortnite seasonal event.