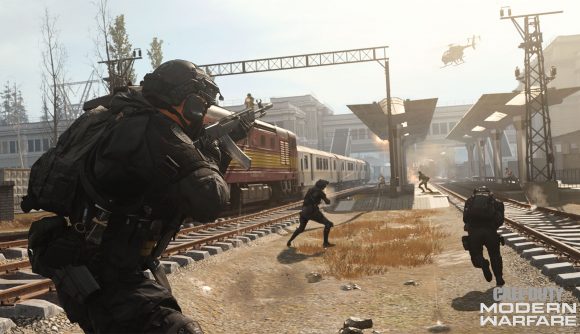 The latest trailer for Call of Duty: Warzone Season 5 gave us peeks at what’s ahead for Infinity Ward’s fast-paced battle royale game – the Stadium is opening up and a fast-moving freight train is on the way. But new details on Season 5 published today by Activision provide a much fuller idea of what we can expect in the coming weeks – including a new ‘mini royale’ mode.

Activision says mini royale “condenses the craziest parts of the main Battle Royale mode into faster-paced chunks of chaotic and almost constant combat.” While the mode will feature a reduced number of players (Activision doesn’t specify how many), it also speeds things up. As Activision explains it, “Only the first and last five minutes of a normal BR game exist meaning rapid deployment, constant movement, and high-kill strategies are set to yield victories that are both short and sweet.”

We’re unsure of what this means exactly, but one distinct possibility is that a few of the intermediate circles are eliminated in mini royale, meaning everyone will have to hoof it over long distances, quickly, in order to make it from the initial circle to the last one. That would mean precious little time for any looting after initial deployment and aggressive approaches would be strongly favoured.

Infinity Ward is also adding in weapon rotation to Verdansk. Non-loadout weapon spawns, either as items on the ground or in supply crates, will be a selection of eight common, 13 uncommon, 15 rare, 19 epic, and 25 legendary variants.

Another new feature hinted at in the Season 5 trailer is the addition of ascender lines for building exteriors. These have been present in elevator shafts in the past, but Infinity Ward is adding them to the outsides of taller office buildings around the map, giving you a quick way up to the rooftop to take up a sniper position (or be immediately shot by someone who thought of it first).

With the arrival of the train comes the newly opened train station. That location comprises several buildings and areas linked to a main ticket hall and the train platforms, all of which will be explorable for the first time this season.

There’s a lot coming to Warzone with the Season 5 release date, and from the sounds of things, we don’t even know the half of it yet.