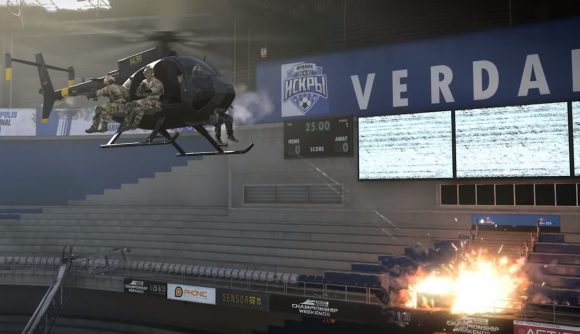 There’s a brand new trailer out now for Call of Duty: Warzone Season 5, and with it comes our first peek inside Verdansk’s most imposing structure, the stadium. Stadium is getting the roof blown off this season, and players will be able to fight it out inside. The trailer packs in plenty of hints at what more is to come in the impending season of Warzone, so read on.

The trailer begins with operatives placing explosive charges around the glass dome in the middle of Stadium’s roof. The bombs detonate and the ceiling collapses, giving us a brief view of the tiered arena seating and mezzanine rings within. The Stadium manages to look just as big on the inside as it does on the outside, and far from being a simple open-air arena, it looks as though there are countless back routes and hiding spots contained within it.

The trailer also shows off the new loot train that’s coming to Warzone, which steams around the map weighed down with tanks and weapons. Some daring operators manage to parachute down to land on it while it’s moving at full speed, which outside the carefully choreographed trailer will likely lead to some hilarious near-misses in the live game.

The Call of Duty: Warzone Season 5 release date is August 5, which is when you’ll be able to see all this new stuff live in Warzone. Opening up Stadium is the first major map change Warzone has seen since launch, so it’s sure to be a hot spot.

If you’re planning on jumping in to check out the inside of Stadium, you’ll want to bring Warzone’s best guns along with you.