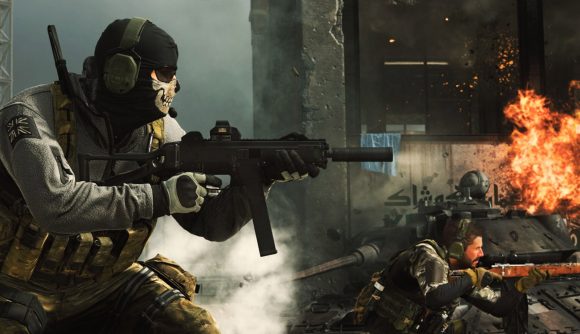 Jeff Leach is an actor whose voice has appeared in several prominent videogames: he’s played Prince Stefan in Battlestar Galactica Deadlock, lent his talents to Total War: Warhammer, and was the voice of Lt. Simon ‘Ghost’ Riley in Call of Duty: Modern Warfare. Now he’s among the many Call of Duty fans voicing their dissatisfaction over Raven Software’s latest Warzone balance update that was meant to nerf several troublesome weapons introduced with Call of Duty: Black Ops – Cold War.

“Just tested the DMR,” Leach tweeted Wednesday. “It still 2-3 shots beams people at close-mid range. It’s only 250+ metres that it kicks a bit and does slightly less damage.”

Warzone players are, in a word, frustrated. On the subreddit, commenters have been grumbling that they suspect the overpowered new weapons are a ploy to increase sales for Call of Duty: Black Ops – Cold War, and the anemic round of nerfs applied to the DMR 14, Mac 10, Type 63, and dual pistols yesterday has done little to quell that sentiment.

“DMR-you-kidding me, @RavenSoftware?” Leach jibed in his tweet.
Several players have offered their own suggestions for more impactful changes, particularly to the troublesome DMR 14, which saw reduced headshot damage and increased recoil in Wednesday’s update. Leach himself suggests nerfing the gun’s rate of fire and increasing the aim-down-sights time on attachments.

Just tested the DMR. It still 2-3 shot beams people at close-mid range. It’s only 250+ metres that it kicks a bit and does slightly less damage.

Nerf the rate of fire and ADS on attachments. Make this operate like a 1980s era rifle please.

Other players have suggested a more dramatic damage drop-off curve for the weapon. As we point out in our guide to the best DMR 14 Warzone loadout, when it’s equipped with the 16.3″ Titanium Barrel attachment that bumps up its rate of fire, the DMR 14’s high damage-per-round makes it extremely lethal, particularly at mid- to long-range, and that hasn’t changed with the latest update.

Raven hasn’t tweeted again since it announced the rollout of the Warzone update Wednesday, so there’s no word on when a more durable fix for the meta-busting weapons can be expected. In the meantime, you might want to check out another battle royale game to keep your skills sharp for when it inevitably arrives.